Greetings from a slug 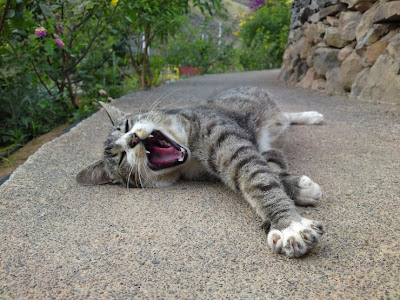 Maybe it's because last night we set the clocks forward, but today I've been beat all day.

Went home to visit my mom and play with my nephew. En route I stopped at CVS to pick up some picture frames. My intention was to give my mom a framed photo of my award-winning niece that I ordered from her local paper. After all, how better to cheer up a grandma than with a framed 8x10 of her granddaughter? I also bought a bottle of vodka and a can of peas (69¢) for the food pantry. On the way out I was intercepted by a Girl Scout who only had peanut butter sandwich cookies left. Since her troop was from my old school, how could I refuse?

I was so happy. I was wearing my official Cubs jacket. I was listening to my favorite Amy Winehouse song on my iPod. The sun was shining. I had a bag full of good deeds.

Then, like the clutz I am, I tripped in the street. My foot got caught in a pot hole and POW. Down I went, landing on the vodka, picture frames, peas and Girl Scout cookies. My initial thought was, "My jacket! My iPod!" Once I confirmed my tunes and my Cubbie blue were OK, I realized I hurt and much had been busted. The vodka bottle seemed severed. The Girl Scout cookies were now booze soaked. I was too eager to get to my mom's and take stock of my wounds to notice that I'd also busted the frame. Thank God the 69¢ can of peas was OK!

This is the second spill I've taken over the last 7 months. When I fell last year while carrying my microwave, it was on rain-slicked streets. It was today, too. I was just so distracted by the sun and the spring I forgot about yesterday's rain and the pools of melted snow and the impact it has the streets, I simply wasn't watching where I was going. Dumb! Dumb! Dumb!

It cheered up my mom to see me anyway. My nephew got to show off his pinewood derby racer -- and his two awards (one for craftsmanship, one for concept), thank you very much. My niece even stopped by for a minute and I was able to embarrass her by fussing over her photos.

I took my nephew for a walk, to buy more vodka, to enjoy a little pizza, and to talk alone for a moment because he was with my mom on the day she put her cat to sleep. He's only 10 and can be very sensitive, so I wanted to make sure he was at peace with all that went on. I also told him what a comfort he was to Grandma.

Now I'm home. And I'm beat. No laundry for me tonight, maybe not this week. I didn't hem any of my new slacks, either. Bad gal. Lazy gal. Tired old gal.

I'm watching the season premiere Celebrity Apprentice as I post this. Our former governor is like the blood blister I now have on my thumb -- creepy but fascinating. Then I think I'm going to sleep.
Posted by The Gal Herself at 3/14/2010 08:58:00 PM 1 comment: