I'm not the one who gets to start my "new life" even as I'm dealing with cancer meds and a clock loudly ticking my life away.

Elizabeth's sister tells the upcoming People how Elizabeth wrapped Christmas presents and brought them along when she went to meet her husband's love child for the first time. Apparently she wants her own children to have a comfortable relationship with their half sister.

It's an act of grace and courage that makes my throat close up a little. It reminds me of another heroine of mine, JBKO. No matter what else was going on in her life Jackie O dependably managed to suck it up and behave admirably when her kids were involved.

For example, John-John's third birthday. Jackie was at the center of a televised State Funeral that day, honoring her husband as she laid him to rest, then representing her country by graciously thanking foreign heads of state. Then she celebrated her little boy's birthday with a preschooler's bash that included cake and games and presents. She went from Eternal Flame to Charles DeGaulle to pin-the-tail-on-the-donkey all in the same day, within a matter of hours. Because John-John was her son and he was only 3 and he deserved a party. Because she was his mother, and that's what mothers should do.

Like Jackie, Elizabeth Edwards is a profile in courage. I have learned much about life from Mrs. Edwards and her books. I'm just sorry her books don't close with a happy ending. I'm sorrier than I ever imagined I'd be. I guess the little girl in me still needs heroines who triumph over all to live happily ever after.
Posted by The Gal Herself at 1/27/2010 10:12:00 PM 4 comments: 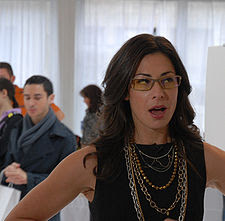 This morning, as I hauled my flabby, sorry, sick ass down to lunch, I swung by Starbuck's because I wanted hot chocolate. I don't normally go into Starbuck's because the smell of coffee makes me a little nauseous, even on the best days. But there was no line (unusual for 11:30) and I figured I could get in and out without inhaling too many perfumas de Columbia.

As I headed into the coffee shop, I saw HER. Oh. My. God. It was Stacy London of TLC's What Not to Wear. She had the whitest complexion I have ever seen, which made her eyebrows and mane look positively inky. I believe she was already made up for the lights. She's taller than my 5'2, but that could be thanks to the black stilettos that clicked on the tile. Her eyes were locked into those of the woman who was walking beside her and telling her who would introduce her -- I believe this is Stacy's way of avoiding fans like me, who would have expressed disappointment at her well tailored, but still obviously real, mink.

From the snippet of conversation I heard, and judging by her makeup, I think she was the featured speaker at some corporate luncheon upstairs. I know she has addressed business groups before on the connection between self-esteem and style.