Well, look at this! 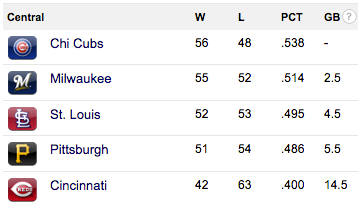 I admit it: at the run-up to the All Star break, I was confused and sad about the Cubs' performance. They weren't playing like World Champions. They weren't even playing .500 ball, and I was worried they wouldn't even make the play-offs.

HA! My guys are now 8 games over .500 and have roared into first place!

A friend of mine, a Chicagoan who moved to DC, teased me on Facebook for the "it's OK, we'll always have 2016" attitude I displayed before the break. Shame on me! I should have greater faith in Joe, Bryzzo, Lester and Lackey.

1: A song you like with a color in the title "Big Yellow Taxi" by Joni Mitchell. Don't it always seem to go that you don't know what you've got till it's gone?

2: A song you like with a number in the title "The One After 909" from the Let It Be CD. One of the first songs Paul and John wrote together, one of the last they performed live together.

3: A song that reminds you of summertime "Somebody's Baby" by Jackson Browne

4: A song that needs to be played LOUD "Stoney End" by Barbra Streisand. When "the fury of the broken thunder comes," I want to hear the fury!

5: A song that makes you want to dance "September" by Earth, Wind and Fire

7: A song about drugs or alcohol "Wasting away again in Margaritaville ..."

8: A song that makes you happy OK, since I'm thinking of Buffett, "Fins to the left, fins to the right, and you're the only girl in town ..."

9: A song that makes you sad "I Can't Make You Love Me" by Bonnie Raitt

10: A song that you never get tired of "Tears Dry on Their Own" by Amy Winehouse

11: A song from your preteen years "Gypsies, Tramps and Thieves" by Cher

12: One of your favorite 80’s songs "Starting Over" by John Lennon

13: One of your favorite classical songs I got nothin'

14: A song that you would sing a duet with someone on karaoke Joan Jett's "I Love Rock and Roll" because there is very little actual singing involved

15: A song from the year that you were born "Jailhouse Rock" was #1 while my mom was pregnant. I think it explains by affinity for Elvis.

16: A song that makes you think about life "The Way We Were." How accurate are our memories? Does it matter? Would we do it again, if we knew how it would end?

17: A song that you think everybody should listen to "In the Wee Small Hours of the Morning" by Sinatra. Frank shows us that pain is a great equalizer. He knows how you feel.

19: A song by an artist no longer living "Wake Me Up Before You Go-Go." Yeah, it's a goofy song. But George Michael sounds so energetic and hopeful. It's poignant to think of where his life would take him.

20: A song that breaks your heart "Touch Me in the Morning" by Diana Ross

21: A song by an artist with a voice that you love "Kentucky Rain" by Elvis

Today was a slow and unique today, unfolding in its own way and at its own pace.

I wandered over to the high school and volunteered to sort books for the upcoming library book sale. I attend the sale every year, but I never worked it before. It was overwhelming! Boxes and boxes and bag after bag of books! Some were so esoteric I couldn't believe anyone would devote themselves to researching, writing and then publishing them (mathematics as taught in Victorian classrooms, for example). The variety in some boxes was a little surprising -- the same household donated both Danielle Steele romances and scholarly studies of the Royal Canadian Navy's role in WWII.

But one Mariano's bag of books made me feel like I knew the donor. Seeing what she read and how she packed the books gave me an insight into her. She's precise -- all the books were packed into the bag so you could easily read the spines, She's a heavy smoker -- the books reeked, but she probably didn't notice. She once had a cat -- one of the books was a cat care book published way back in the 1950s. She loves mysteries -- especially Evanovich and Grafton. And she has a bad back -- there were books about coping with back and neck distress.

In exchange for my efforts, I got to take any paperback I wanted for 25¢. I chose a very well-worn Agatha Christie called A Murder Is Announced. This edition was published in 1991. On 6/8/95, the Charlestown Branch Library marked it as "discard or destroy." I'm glad someone rescued it, but how did it travel the 1000 miles from Massachusetts to Chicagoland? I wish Miss Marple could solve the mystery of the book itself for me, as well as the contents.

Then I had a lovely, leisurely lunch at the newish (opened in April) restaurant that opened a few blocks from the high school. It was quiet and cool, and the pulled pork sandwich was delicious. I didn't really want the side salad, but I must eat like a grown up. I had a summer mule, and it always makes me happy to find new ways to enjoy vodka.

Grocery shopping, nap, Cub game. It's all tied up at 1-1 in the top of the 9th. Gulp! If we win this game, we're in sole possession of first place, thank you very much! If we lose, we stay tied. (My, but it's hard to type with fingers crossed.)