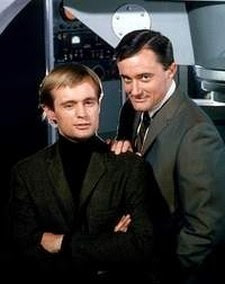 I'm watching The Man from UNCLE, one of my favorite shows when I was a little girl. It was one of my favorites because I thought these two were hotties. It's obvious to me now, 40 years later, that I clearly had no idea what I was watching.

The plots are complicated, violent, over the top and drenched in Cold War paranoia. I couldn't have comprehended all that. I was right about these two, though. They still are very attractive. And the interplay between them is priceless.

Agent Solo is forever optimistic. No matter how bad the situation is, how sadistic the torture he faces, how inevitable his demise appears, he is always sure that somehow, some way, it will all work out in the end. Right will triumph, and he will live to fight another day, to romance the girl, and to wear another really nice suit.

Agent Kuraykin is the brooding pessimist. His dress is more casual, as befits a man who is more concerned with intellectual pursuits. His attitude toward his assignments is that if it can go wrong, it will. Perhaps that's why he's always more willing to rush in and rescue Napoleon than Solo is to rush in rescue him. While Solo is the more flagrant ladies man, Ilya does pretty well with the girls, too.

Napoleon and Ilya seem to genuinely like one another, and share the kind of day-to-day, workaday bond that coworkers share. They frequently ask one another what's up, and shake their heads over the unreasonable behavior of their boss, as though they worked in neighboring cubicles instead of for a supersecret intelligence agency dedicated to protecting the free world from tyranny. They're hip, dry and funny.
Posted by The Gal Herself at 5/02/2009 10:19:00 PM No comments: Links to this post 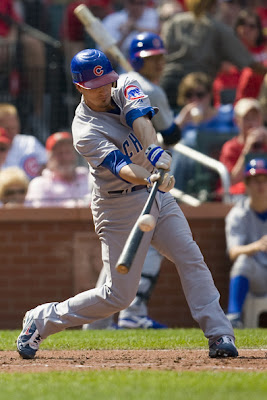 Right now, at this very moment, I am happy.

• I had my session with my personal trainer. While it was tough, it wasn't as bad as last week and now that it's behind me and I'm showered and fresh, I'm so grateful for the exertion.

• Cubs are on the verge of 2 in a row over the Marlins. I'm watching Ryan Theriot at bat, and my every thought about him is impure.

• The sun is out and the sky is blue.

• I love my Brueggar's Smoked Salmon Softwich -- and I have been reassured by the Daily Plate that I can enjoy it without guilt because I'm still within my daily caloric limits.

1. Do you feel that you have “a score to settle” with anyone? Not anymore. As usually happens, the karma train took care of her. I'm thinking of a former co-worker, emphasis on the "former," the one I used to call The Freakazoid Bitch. It took a while, but ultimately the powers that be at work recognized how divisive and ineffective her management style is.

2. Do you own anything that you think is unbreakable? My initial response is "Reynaldo's indomitable spirit." Only I learned long ago that one never owns a cat, you share your home with him.

3. Tell us about a crazy thing you did in high school. During the middle of the night at a late-autumn sleepover, I took a dare and dove into the family's not-yet-drained pool. It was filthy and filled with plant life (I still remember opening my eyes under water and have never seen that particular sickly shade of green, before or since) and soooo cold. It was crazy and stupid and even dangerous, but my 15-year-old honor was in tact. (I know, I know -- big deal.)

4. Name the one talent of yours that you think is the best. Writing has always come easily, and now I make my living doing it.

5. Who wins American Idol? (if you don’t watch, tell us about a reality show that you do follow.) Adam! AdamAdamAdamAdam. (I like Adam.) I used to make fun of American Idol, but now I accept that it is more than a show, it's Life.

6. What is your favorite movie in black & white? My Man Godfrey.

7. What is one thing advertised too much on TV? The Snuggie.

8. What is your current favorite TV drama? Law & Order: SVU. Elliott and Olivia.

9. What is your current favorite TV comedy? Nancy Grace on HLN. Oh, you mean she doesn't mean to be funny?