Greetings from the corner of Weird but Sweet

My neighbor at the end of the hall is a lonely retiree who gives me waaaaay too much thought. So when he startled me in the laundry room this afternoon and said, "May I ask you a personal question?" I knew we would begin traveling down Weird Street.

"Why have you never married?"

Oh, good. I was sick this morning. Do I really need to deal with this now?

I responded politely that I was almost married once but didn't want to move to Philadelphia. It sounded true because it was almost true, and I thought this would end the conversation.

No, he told me the story of his one great love, and his biggest regret. This is where we make a sharp turn and unexpectedly end up on Sweet Avenue.

When he was away at college (during the 1940s), he saw a girl at the grocery store who took his breath away. He saw her again a few days later at a public swimming pool. He was showing off his diving technique and her friend asked him to show her how to execute a dive. He said he would ... if she introduced him to her friend.

They dated twice, and on the second date he took photos of her. Then she had to go home to Mississippi. He wrote her a letter, followed by roses. She responded by inviting him to spend the weekend with her (and her family, he hastened to add) in Mississippi. He was so happy and excited. He showed her photo around the dorm and told everyone about the upcoming trip.

One of his dorm mates told him how to treat a girl if you love her. Walt didn't go into detail (thank goodness!) but I suspect it was suggested he dial up the machismo. Since the guy doling out the advice was successful with the ladies, Walt adopted his techniques.

It was a disaster. He acted like someone he wasn't, someone his girlfriend didn't know or like. He came home on the bus broken hearted. They broke up, and he's never been in love "like that" again. (I don't know if he's never been involved with a woman again -- he didn't say and I didn't ask).

I told him he should write this story out, maybe that would help him feel more peaceful about it. To trust that these things all work out for the best. Maybe she married and had kids, and one of those kids saved lives. I didn't know what else to say.

I enjoyed the evening. It's the aftermath that's bad. 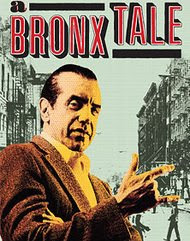 Last night, my friend Kathleen and I went to see A Bronx Tale, the one-man show starring Chazz Palminteri. The man prowls the stage like a jungle animal, playing every one of the characters -- including himself from age 9 to 19. It's well-staged and very moving, and Palminteri's accomplishment cannot be overstated. This is a 90-minute monologue that bounces from comedy to drama, romance to action. He didn't even stop for a drink of water!

Before the play we had dinner and I ordered the most delicious Maple Grilled Duroc Pork Chop (with sour cream mashed potatoes, bacon, apple cider reduction).

I began paying for it at about 4:00 this morning. In addition to the unpleasant gastrointestinal result, I had a fever, which kinda scared me so I took today off. After noon and still in my pajamas! But at least I'm feeling better.