Talked to my poor mom for about an hour tonight. She spent the afternoon in court with my uncle. He is now the ward of an elder care guardian appointed by the State of IL. No one knows yet what the immediate ramifications of this ruling is, but my uncle is sleeping in his own home tonight, in his own bed.

The lawyer representing the State of IL says that the action was initiated by "an institution," but beyond that, we'll never know who is behind this. It's not my cousin, my uncle's only child, and I'm relieved. But my cousin told the court she won't now, and never will, become his guardian. It must have been excruciatingly painful for both father and daughter.

I don't judge this. While my uncle was very good to me, he was not often a good father. He found himself with a wife and a baby when he was still a teenager, and I think he resented my cousin for being a responsibility when he would have rather been free. He really didn't begin paying consistent attention to his daughter until about 10 years ago, when her sons were babies. In fairness, a few years ago she tried to convince my uncle to move closer to her and her family, but instead he chose to live closer to the gambling boat, with disastrous results. So today was awful for her.

But worse for my uncle, who literally fell in the gutter in front of the court house.

President Kennedy once said, after spending a few hours with his stricken father, "Old age is a shipwreck."

Selfishly, I am hurting, too. I am slowly realizing that not only has my uncle's body failed him, his mind has, too. Instead of being the renegade force of nature I've known my whole life, he has become a tearful, frightened child.

Sometimes I love Joe Biden SO MUCH! 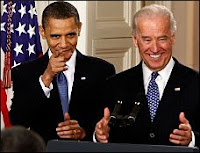 "This is a big fucking deal."

-- A jazzed up Joe Biden to Barack Obama at the signing of the historic health care reform bill. The veep introduced the president to the excited crowd at the White House and leaned in to congratulate him -- without remembering that the microphone was live.

Sometimes I love Chris Matthews SO MUCH!

I have Parkinson's Disease in my family, and the attitude of these "rough 'n ready" anti-HCR, Americans for Prosperity guys offends me. Chris Mathews articulates this better than I ever could: "You have a health care plan for the healthy."

You folks in Americans for Prosperity, be grateful you're healthy enough to stand and yell, and don't denigrate those who can't.
Posted by The Gal Herself at 3/23/2010 02:39:00 PM 1 comment:

This comment was left on one of my posts this morning. The author is either a software program or a person accustomed to a language other than English who then had this rather awkwardly translated. The original message contained tons of links, which I'm not going to include here. Other than that, I have changed none of the wording or punctuation. But here goes:

Thanks for your nice sharing first.I don’t know if you are shopping online or not.I always do this. I think it is a very convenience and save time way to buy goods.Buy Air JordansNike Jordan Basketball Shoescheap nike shoesnike jordan retro shoesAir JordansNike KicksAir Force OnesNike Dunks LowAir Jordans ShoesNike shoesed hardy shirtsMBT Shoes SaleChristian Louboutin ShoesWholesale Nike Shoes.They have put so much effort to provide a great customer experience that it gives them a great differentiation and customer satisfaction tool, which ultimately drives customer satisfaction and business success.
Posted by The Gal Herself at 3/23/2010 08:33:00 AM 2 comments: