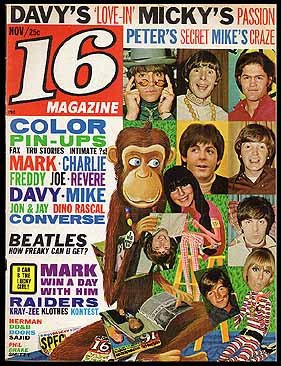 Not many people remember the name Gloria Stavers, but if you were a girl in junior high school between 1958 and 1975, the odds are good that you were familiar with her work. For those were the years that she was the editor of 16 Magazine, the teen magazine that brought us as close as possible to our heart throbs.16 had the best interviews, and the best, most kissable color pin-ups -- perfect for decorating my locker door and bedroom wall.

Here are 13 of the most prominent boy toys to grace 16's pages during Gloria's time at the helm. I was madly in love with some of them (Paul McCartney, Bobby Sherman and David Cassidy) and a little in love with others (Raider Mark Lindsey). Enjoy this trip down memory lane, and the memories of a simpler time.

WHO WAS YOUR BUBBLEGUM CRUSH? Please let me know in the comments. I'm especially curious about who guys loved, pure and chaste from afar, when they were 11, 12 or 13.


Get the Thursday Thirteen code here!

The purpose of the meme is to get to know everyone who participates a little bit better every Thursday. Visiting fellow Thirteeners is encouraged! If you participate, leave the link to your Thirteen in others’ comments. It’s easy, and fun!

Stolen from a silly little freak ...

Who goes by the name of Snarky Pants.

1.) You’re on a trip taking a tour through the jungle. You have a backpack with some food, some first aid supplies, a pocket knife, a flashlight and a couple bottles of water. Somehow, you get separated from your group. By night fall you haven’t found your group and haven’t heard them looking for you. How long do you think you would be able to survive on your own?

A couple of days. On the plus side of the ledger, I'm very independent and I don't panic. Now for the debits: I have NO sense of direction whatsoever and cannot stand the heat. I'd do well to live by Mrs. McGinnis' words of wisdom (an imposing dragon of a woman, she was my Girl Scout leader for several years) and just stay put until someone finds me.

2.) Do you think it’s okay to lie to spare someone’s feelings? Why?

Yes. I do it all the time. Most things aren't worth hurting someone's feelings over. On the other hand, I tend to be insensitive because I often just don't get it. For example, I was dating a very hot guy who was a bit taller than I am, so I guessed him to be 5'5. He was so good looking and so very good in bed and had such a terrific voice that it never occurred to me that his height bothered him. One day I asked, "When did you realize you were always going to be short?" Oh ... my ... God! He actually flinched as though I thrown water in his face. I felt terrible about it.

3.) If a talking Gal doll were made, what are THREE phrases it would say?

a. The thing of it is ...
b. What the fuuuuuuuck?
c. I'd rather remove my own spleen with a butter knife.

I'd prefer it if I could read my cats' minds. I think that would be great fun. However, if it's limited to people, I'd only want to do it while on the train or bus, when I'm bored. I think it would be highly entertaining. I'd probably give in to temptation and do it more often though, and then feel bad because it would be intrusive and wrong. I tend to be very private and would hate having someone do it to me.

5.) RE: Drunk confessions, are they the things people can’t bring themselves to say sober or just crazy ramblings of an influenced and intoxicated mind?

6.) What brings out the worst in you?

Bullies. I hate bullies. A coworker once nicknamed me "Avenger Bunny" because nothing sets me off like witnessing bullying. It's the duty of the bigger to help the smaller in this world, and I cannot stand it when that world order gets knocked on its side.

7.) Do you think long distance relationships work? Have you ever been in one before?

Yes. I was in one for years and it was the happiest time of my life. Of course, I think it helped that, according to my shrink, I have a deep-seated fear of genuine intimacy, so you shouldn't go by me. I'm not a well woman.

If you choose to play, let me know so I can compare our answers.

Often at the health club, I zone out and inhabit my own little world. Today, for some reason, I was more engaged with my surroundings and was eavesdropping. What I overheard reiterated how diverse my day-to-day is.

While dressing, I listened in on two big -- VERY BIG, like big enough to make me look slender -- young women discussing what a pain it is to bail someone out of jail. They make you wait forever, yet you can't smoke in there (nor in any public building in Illinois) nor use your phone -- not even to text!

Then while I was on the exercise bike, I heard two absolutely fantastically made up young women talking about refinancing their homes. They were breathlessly batting financial institutions and APRs back and forth as their feet spun round and round on the pedals.

I estimate all four women were about the same age (25 to 30), in the same health club, undoubtedly live and work within a half hour of one another, and yet lead completely different lives. My life is nothing like any of theirs. "There are nearly 3 millions stories in the Windy City ..."
Posted by The Gal Herself at 3/18/2009 01:22:00 PM No comments:

One of Oprah's puppies has died, and his littermate, also adopted by Oprah, is very ill. The culprit? The Canine Parvovirus.

Aside from the heartache attached to this -- something everyone who has ever shared their life with a critter can relate to -- this is a tragedy because Oprah used these adoptions and the publicity they received to highlight America's shelter pets. If the fate that has befallen Ivan and Sadie discourages anyone from giving a shelter animal a home, that would make this sad situation even worse.

99.2% of the puppies received by PAWS Chicago either did not contract parvovirus or were cured of the disease.
PAWS (Pets are Worth Saving) is a good shelter. They treat the furry little souls in their care with kindness and are stringent in their adoption procedures. They help the community with all kinds of good works, including a Pet Food Bank to assist those who are struggling in this economy but can't bear to give up their pets. In short, they are the Good Guys. But parvo is a tenacious virus and it's difficult to successfully vaccinate a puppy against it if it was exposed 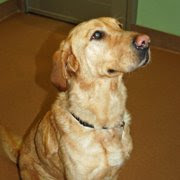 The unfortunate fact is that there are no sure things in life, except death. It takes courage and faith to give any animal a forever home, for in the back of our minds we know that our hearts will break when the relationship ends too soon. PAWS can't be blamed for that.
Posted by The Gal Herself at 3/18/2009 01:48:00 AM 5 comments: