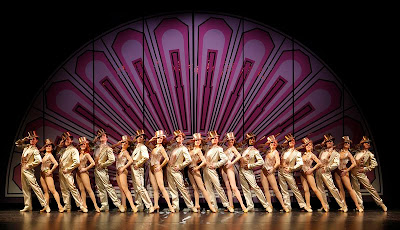 Last night I saw A Chorus Line. It's my favorite show, and I think that's because it's the show I know the best. I saw it during it's original 1970s run in Chicago (back then I was still living at home and going downtown to see a lavish production was quite a big deal) and it was the first play I saw on Broadway on my first trip to New York (followed by dinner with Sardi's; oh, the glamor!). I had the soundtrack on vinyl and listened to it neverendingly on the portable stereo in my little yellow bedroom in my parents' home.

For the first time in years I heard "Dance 10, Looks 3," "At the Ballet," "Nothing," and my favorites, "What I Did for Love" and "One." (That's the finale of "One" shown above.) The magic is still there. Maybe it's because I'm still sick. Maybe it's because I'm worn out by work and worried about Mom. Perhaps watching this production was like revisiting an old friend. Maybe it's because the play really is exceptional. I'm willing to entertain any of these options.
Posted by The Gal Herself at 4/16/2009 01:57:00 PM No comments: