Sunday. Mad Men and Joey. Comfy on the sofa, watching the season premiere of my favorite show with my big ol' gray tomcat pressed tight beside me. Joey and I are the picture of contentment.
Posted by The Gal Herself at 8/16/2009 10:17:00 PM 1 comment: Links to this post

A whimsical investment in the future 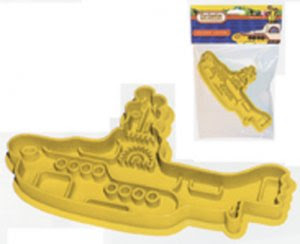 My niece has spent much of this summer between her junior and senior years pursuing her career goal -- to be a chef. She's also a new generation Beatles fan. So, as I wandered the flea market at The Fest for Beatle Fans, I was tickled to find the perfect little tzotchke to show my support for her ambitions: an official Yellow Submarine cookie cutter.
Posted by The Gal Herself at 8/16/2009 08:36:00 PM 3 comments: Links to this post

Saturday. Having the time. This weekend my oldest friend and I checked into the Hyatt O'Hare and spent Saturday/Sunday at The Fest for Beatle Fans. I don't know how many times she and I have attended this fan convention, but it's a safe to say we have been together at this fest longer than the Beatles were together as a band. It's appropriate that we attend this together because we bonded over the Beatles back when we were first graders in Mrs. Krach's class. This year, though, it wasn't really so much about The Lads. For she's been struggling with health and life issues that have been troubling us both. There were things I was reluctant to say before yesterday because I wanted us to have the time and privacy to understand one another -- her to share more of how she feels, me to make sure she understood I was not criticizing but instead trying to help. It was emotional and tiring, but I feel better. More importantly, I hope she feels better, too.
Posted by The Gal Herself at 8/16/2009 07:59:00 PM 1 comment: Links to this post