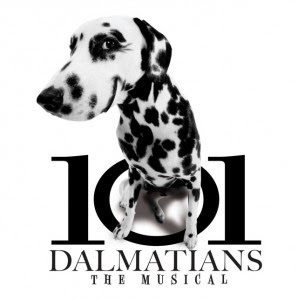 So who cares if the score wasn't remotely memorable?

My friend Barb and I went to see 101 Dalmatians last night. The score, with lyrics by Dennis DeYoung, was a yawn. As were the performances by most of the adults. But the majority of the puppy parts were played by energetic, adorable kids. It was a joy to watch them dance and cavort (as only kids and puppies can). The children in the audience were very well behaved, too. I love going to family theater events because you're often surrounded by little ones excited to be up so late and doing something so grown up, with the little girls dressed to the nines. (My favorite little theater goer wore a rhinestone headband that, once she was outside, she covered with a cloche hat and matching mittens. You could tell by the way she dealt with the hat and mittens, she felt tres chic.)

For me, though, the real stars were the 15 real, adult dalmatians. Especially the one who screwed up, which made her more endearing. She was supposed to pull a dog house to centerstage and then exit stage left. Only she stopped in the middle of stage beside the dog house, as though awaiting her applause. That wasn't the case -- turns out she just forgot what she was supposed to do next. Her trainer came onto the stage and made an expansive hand gesture which she understood, and she trotted off.

Of the 15 canine stars, 7 were originally shelter dogs and are available for adoption after this tour is over. Before deciding you want to give one a "forever home," the Playbill warns that dalmatians are very active, very curious, sensitive to cold and susceptible to sunburn. They can also be "the best friend you ever had."

On a personal note, I mentioned what was going on here at work and Barb reassured me that should I be let go, she could toss a few freelance jobs my way. And she paid for dinner! She said it was because she was so late and caused me stress when I had a cold and all, but I know it was because she worried about a different kind of stress.
Posted by The Gal Herself at 2/18/2010 11:16:00 AM 1 comment: 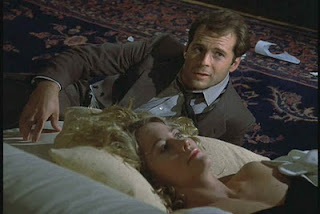 Never wanted to
What am I to do?
Can't help it

Yes, I've unearthed my Moonlighting DVDs. A logical transition from Nick and Nora. And, in their way, more romantic (at least in the unrequited seasons).
Posted by The Gal Herself at 2/18/2010 08:22:00 AM 2 comments: