A man is dead. She is silent. 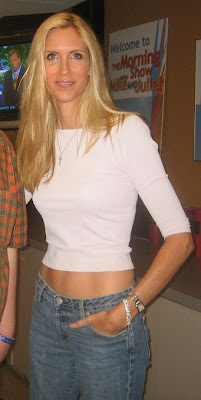 I just visited Ann Coulter's website. I wanted to see what she had to say about the murder of Dr. George Tiller. As of 4:45 CST, she had nothing to say.

Could it be her natural discretion and sensitivity? After all, a man was gunned down inside his church on the Sabbath. His wife was nearby, preparing to perform with the church choir. Could the gravity of those two last sentences weigh on Ann Coulter's soul?

No, don't think so. Miss Ann is one of those "Christians" who have twisted and perverted my religion to her own devices, using her "Christianity" as a hammer to beat up and muddy the reputations of those she doesn't agree with. At a conference entitled "Reclaiming America for Christ," she weighed in:

Coulter’s rhetoric was no less violent. In describing the murders of doctors and health care personnel who worked at abortion clinics, Coulter said the victims had been shot, “…or, depending on your point of view, had a procedure performed on them with a rifle.”

More recently she named today's murder victim, Dr. Tiller, specifically. In ranting about Notre Dame's invitation to President Obama to speak at commencement, she helpfully suggested, "Being such a prestigious institution, Notre Dame could probably get famed partial-birth abortion practitioner George Tiller to do the demonstration at next year's graduation. Obama could help -- inasmuch as Tiller the abortionist is a close friend of Health and Human Services Secretary Kathleen Sebelius."

I take my relationship with Jesus very seriously. When I've been sexually active I've been overly conscientious about protected sex -- not because of AIDS, but because I feared an unwanted pregnancy more. I personally do not believe in abortion. But I believe in secular government, the separation of Church and State, and each woman's right to make that choice for herself.

That said, I can state this with a very clear conscious:
This bitch is a horror with blood on her hands.
Fortunately for Ann, the God I worship is a loving God who forgives her. I only hope this wretched bitch can somehow forgive herself.

While I'm not good enough to forgive her, I hope that the toxic rhetoric on the sensitive subject of choice is dialed down. Please, please, please. This kind of thing has to stop.