I always agreed with Simon, until tonight. I heard Matt indulge his way through a mannered, synthetic rendition of "My Funny Valentine." Amazingly, Simon thought it was authentic, with hints of Nat King Cole. Really? Oh-kaaaaay ...

I enjoyed everyone else. Kris was an adorable, fresh-faced sincere puppy on "Just the Way You Look Tonight." Alison surprised me with a straight up "Someone to Watch Over Me," which used her youth to a touching advantage.

This week, as last week, belonged to Danny and Adam. Danny was attractively alpha on "Come Rain or Shine," kicking it straight through the goal posts. Adam reminded me of Freddie Mercury as he sauntered down the steps singing "Feeling Good." He succeeded at every ambitious twist and turn Matt tried.

Just not destined to work out 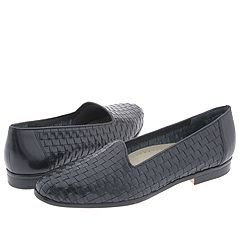 My solid blue flats are a mess, with irreparably scuffed toes. I have two pair of cute Roxys (which remind me of my Vans from back in the olden days), but they are multicolored and sometimes I must dress like a sedate, responsible businesswoman and that calls for navy pumps.

So I found these on Zappos. And promptly ordered them. They were more than I could afford at the moment, but navy flats are hardly a frivolous expense, especially because I believe I'm meeting with the client next week.

However, I ordered them way too promptly because no sooner had I hit "send" than I discovered I already had a pair of almost-new navy flats (each with a tassel!). So I didn't need these new beauties.

But Zappos is so damn nice! I got an email saying they had upgraded and expedited the shipping on my new purchase. Then, for my convenience, I got a tracking number. Zappos is more than holding up their end of the deal, so how could I not keep the shoes?

They arrived today, and they pinch. Yes, I'm wearing heavier socks than I normally would, but still, if they hurt I won't wear them. So back they must go. Mimi has bestowed this lovely award on me. Naturally, I am honored, and honor-bound to follow the directions: "The Honest Scrap award comes with a caveat or 2. Firstly you have to tell your readers 10 things about you they may not know, but that are true. Secondly you have to tag 10 people with the award."

1) When I was 15, I loved Cubs first baseman Joe Pepitone so much that I cried when he was traded. And I'm not a crier. It was devastating. (I had this baseball card.) 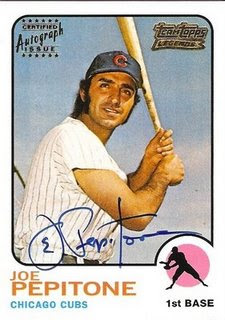 2) I wear black only when I'm feeling especially lazy. It's really not a good color on me, leaves me looking washed out, but it goes with everything.

3) "Just the Way You Are" is one of those dumb songs that gets me every time. I know that Billy Joel left that particular muse two wives ago. I know it's a favorite of every wedding singer and karaoke crooner. But someone gave it to me once because it reminded him of me -- "I just want someone that I can talk to. I want you just the way you are." Verklempt!

4) I enjoy the show Morning Joe on MSNBC so much that I nearly ordered Joe Scarborough's book. Then I saw the title: The Last Best Hope: Restoring Conservatism and America's Promise. Oh well, never mind. Still, it's a refreshing show if you enjoy lively political discourse with humor but without incivility.

5) I ordered a pair of navy pumps from Zappos because I thought I had scuffed my only pair beyond the point of repair. Then I discovered I already had another, almost new pair. I really must clean out that closet! (I'm keeping the new ones.)

6) Up until today, when I looked it up, I had no idea where Aruba is.

7) I miss the show Kate and Allie.

8) Bob Hope never made me laugh. Not once. And he lived to be 100! A full century of not making me laugh.

9) If someone wrote my biography, I wonder what the turning points of my life have been. I believe I lack the perspective to recognize these things when they're happening.

10) I still haven't figured out how to hook up my DVD player.

Thanks to Mimi for tagging me. I must get back to work now, but will return later to tag.