Can't we just stick him in a cage at Lincoln Park Zoo?

I've been in therapy longer than anyone except, possibly, Woody Allen. I have great sympathy for others who are struggling. But Carlos Zambrano is just a fuckin' hot headed bully, and this deal is the work of a very good agent. 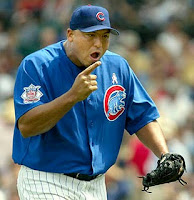 Zambrano to go on restricted list
By Bruce Levine
ESPNChicago.com

CHICAGO -- After consulting with Major League Baseball, the players union and the agent for pitcher Carlos Zambrano, the Chicago Cubs announced on Monday a collective agreement between all parties that will allow Zambrano to be removed from the suspended list and placed on the restricted list on Tuesday.

The Cubs don't anticipate Zambrano being activated until after the All-Star break at the earliest. Cubs general manager Jim Hendry said Monday that Zambrano and his agent have not asked for the right-hander to be traded or released by the team.

Zambrano has been suspended by the team since Friday, when he threw a tirade in the dugout that led to a verbal confrontation with teammate Derrick Lee. Beginning Tuesday, Zambrano will be paid and has agreed to go through a treatment program that will have him away from the team until at least July 15 -- when the Cubs host the Phillies after the All-Star break. The groups collectively agreed to find independent doctors to evaluate Zambrano and provide treatment following the evaluation. During this evaluation period, and during any type of therapy, Zambrano will not have any contact with his Cubs teammates.

Zambrano had contact with Hendry on Monday and was remorseful about his dugout tirade at U.S. Cellular Field. Manager Lou Piniella has stated that Zambrano will go into the bullpen when he returns to the 25-man roster. Once Zambrano is moved to the restricted list, Jeff Stevens be called up to fill his roster spot. Zambrano surrendered four runs to the Chicago White Sox in the top of the first, then began screaming in the dugout, knocking over a Gatorade cooler before getting in the face of Lee. Piniella then sent Zambrano home, and Hendry suspended him indefinitely.

Bruce Levine covers baseball for ESPN 1000 and ESPNChicago.com. Information from The Associated Press contributed to this report.
Posted by The Gal Herself at 6/28/2010 08:21:00 PM 1 comment:

Just when I was about to sign off Facebook forever,* I was friended by my niece, who just opened an account. What's more, I represent her first friend request. Not bad for an old fart, huh? 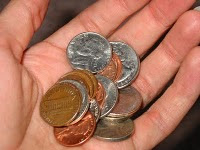 Just as like last Tuesday, I was happy to see both Molly the Cat and "my" homeless man at lunchtime today.

I'm happy to report that Molly's coat is in fine condition and she even let me look at her paws as I pet her and they look clean. Her male person was with her today, and he always reassures me she eats before he does. I believe it. For her to be as calm, clean and healthy as she appears is a miracle. (She allows me to pet her, but she really perks up when she spots a pigeon.) He had a fresh haircut, and Molly's female person was nowhere in sight, so I suspect she's working somewhere and he's prepared for interviews. I have a feeling the day will come when I won't see them at all anymore, but that won't be cause for concern because I predict Molly's people will, like cats, land on their feet.

As for "my" McDonald's Man, well he remembers me again, which is nice. He actually pumped his fist when he saw me approach and, once again, thanked me and told me my "blessings will not soon be forgotten." How do you explain a man with cataracts, who lives in front of a McDonald's, who is so gracious and pleased with 35¢? The "blessings" he has reminded me to appreciate will not soon be forgotten, either.
Posted by The Gal Herself at 6/28/2010 04:27:00 PM 1 comment: