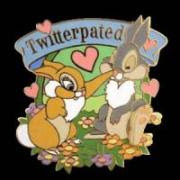 My boss -- a balding, gray-bearded, suburban 50-something dad -- has been behaving in a most peculiar and unpredictable way lately. During our internal meetings, he disses our staid, down-to-earth client because they aren't willing to spring for more TV commercials … even though TV is the absolute wrong medium for what they're promoting, he would like to spend more time throwing around phrases like, "talent," "editing," and "on the coast." He has been cutting me out of the process, working directly with our department planner and the woman previously referred to as New Mom. My boss' new style boomerangs between merely annoying and getting in the way of my productivity.

Then, suddenly, it hit me. He has a crush on one, or both, of them! They are both young enough to be his daughters, and he wants them to think he's cool and on top of everything. I'm not implying anything is going on, in fact, I'm sure nothing ever will. But he's twitterpated! I guess now that his only son is away at school and with the workplace getting younger and younger, it's only normal that he have a midlife crisis. Since I have a front row seat for it, I must try not to smile too much.
Posted by The Gal Herself at 10/19/2009 02:40:00 PM 3 comments: Links to this post

This week's movie topic is all about Westerns

I don't think of myself as being a big western fan, but now that I think of it there are a few that are very close to my heart.

The Electric Horseman. Redford plays a former rodeo champion who sells out for easy money, endorsing breakfast cereal. He gets fed up and drunk and steals the champion race horse he's supposed to appear with. Fonda is a TV reporter who thinks she's found the latest senational "Balloon Boy" story and takes off after him. The mountains are beautiful, the stars are beautiful, the horse is beautiful. And I like its message about being true to yourself.

Butch Cassidy and the Sundance Kid. The two coolest guys ever.

Destry Rides Again. James Stewart is Destry, the pacifist sheriff who restores order to a wild western town. Marlene Dietrich is Frenchy, the dancehall girl with a good heart and "kind of a lovely face under all that paint." They are both very hot and very funny together and this is just another one of those terrific movies made in 1939. (Gone with the Wind, Wizard of Oz ...)