For Thursday I only deserve the dust pail. I don't think I did enough to earn the broom, too.

I have boxes of gifts in my closet -- birthday and Christmas gifts purchased for family and friends while I was on vacation, or when I happen upon just the perfect thing at an unbeatable price. Anyway, last night when I couldn't sleep (it was after midnight, so it counts as Thursday) I started digging around up there, looking for what I already bought for my two June birthdays.

It was good to organize and take inventory, but the exercise revealed that a couple items are missing -- which means I never put them away up there in the closet. Where are they? Those birthdays are almost upon us, so I better track them down. Something else to do over Memorial Day!

The"fan girl" in me is so happy for them! 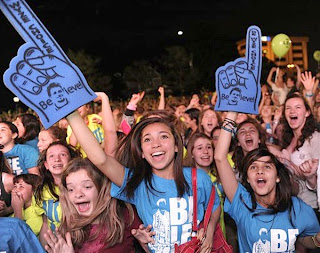 Here's a Chicago Tribune photo of the Mount Prospect American Idol viewing party at the moment their hometown hero, Lee DeWyze, was named winner. Look at those faces! They are TOO adorable. Why, you'd think he was Bobby Sherman or David Cassidy or somethin'.
Posted by The Gal Herself at 5/27/2010 04:30:00 PM 1 comment:

I grew up on Diana Ross. I can still recall The Supremes' appearances on The Ed Sullivan Show and the impact they had on me. It wasn't racial -- though she does deserve to be lauded as one of the first crossover performers (yes, after Lena Horne but decades before Michael Jackson) but that wasn't what made her special to me.

She was one of the few young female stars who came into my family's livingroom through the magic of television and dominated. No wussy Leslie Gore. No hippie/dippy Michelle Phillips. Miss Ross was always front and center, always dripping in jewels, high atop the coolest shoes, always looking as though this was about her, and she was seizing the moment.

Diana Ross was the first emblem
of female empowerment I encountered.
I didn't discover Babs until much later. But just as I felt liberated when I saw Fanny Brice steering a tugboat while belting "Don't Rain on My Parade" or Katie Morosky speaking her mind in The Way We Were, Miss Ross showed me that women can unashamedly love what they're doing and revel in their own success.