Saturday 9: Stand by Me

1) "Stand by Me" is one of the songs John Lennon did at his last public performance back in 1975. First recorded by Ben E. King, "Stand by Me" was also covered by Mickey Gilley and Otis Redding, among others. Can you think of another song that has been recorded and then re-recorded by someone else? One of my favorite songs -- this time of year or all year around -- is James Taylor's cover of Joni Mitchell's "River."


2) The lyrics say, "Whenever you're in trouble, you can stand by me." Tell us about someone you know you can count on. I'm really blessed in this regard. Where I turn just depends on the trouble I find myself in.

3) While "Stand by Me" was solo Lennon, John is best known as one of the Beatles. Which group do you listen to more often -- The Beatles or The Rolling Stones? Who doesn't love the Lads from Liverpool? I remember an incident a few years ago where I was shopping, wearing a Paul McCartney t-shirt. The guy who bagged groceries was an adult with learning disabilities, usually shy and reluctant to make eye contact. When he saw my shirt he started talking a blue streak, about how when he babysits his little nephew they sing Beatle songs together. I thought it must be wonderful to be one of the Beatles and to have had such a happy and pervasive impact on the world.

4) Lennon liked to tell how, when he and Paul McCartney were teens, Paul's father used to discourage friendship between the boys. Paul ignored his dad's advice and the result is the most successful songwriting partnership of the 20th century. Tell us about a piece of advice you're glad you ignored. When I was in my late teens, a friend tried to convince me that psychedelic mushrooms would make me a better writer. 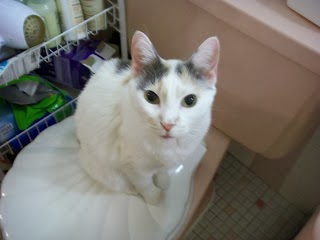 5) John loved cats. When he was a teenager, he first met his favorite, a stray he named Tich, in the snow and gave the cat a safe, lifelong home. John was very proud that Tich lived to be 20 years old. Tell us about a pet who has a place in your heart. Let me tell you about my diva, my girly-girl Charlotte. She is my feline major domo. It is obvious that she thinks we're equals who run this household together. She's emphatic about her likes and dislikes. Likes: treats, curling up in the armoire, observing closely while I put on my makeup or do housework. Dislikes: being picked up, going to the vet, and my other cat, Joey. She's about 16 years old now, and losing weight. It could the new diet she's on or maybe it's a thyroid problem (not at all unusual in senior kitties). We'll have to go to the dreaded vet after the holidays, no matter how strenuously she objects.

6) John unsuccessfully tried hypnosis in his quest to stop smoking. Have you ever been hypnotized? Nope

7) John has been inducted into both the Rock and Roll Hall of Fame and the Songwriters Hall of Fame. What Hall of Fame would like to see yourself in? If the Baseball Hall of Fame had a wing for fans, I deserve to be in it. I love my Cubs, no matter what!

8) John had a passion for slot cars and raced them on an elaborate track in his game room. What games or toys do you still enjoy? I like ferris wheels.

9) John wrote about his jealous streak. What personality trait of yours do you wish you could change? My laziness!