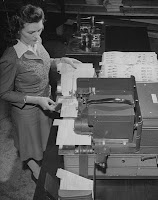 My boss gave me my annual performance appraisal today. Most of it was good. He actually even praised me for my willingness to own my faults and shortcomings, which surprised me because I often get the impression that some coworkers think I'm an overwhelmingly willful diva. He singled out certain projects that he believes I did well on and said he'd do what he could to get me a raise -- my first since 2008 (which was my first since 2004; that means I've had one raise in 7 years). I told him about my upcoming surgery and that I'll probably out for between 4 and 9 weeks. He responded positively in that he's confident he'll be able to get freelance help in my absence, something that wouldn't have happened when the agency was struggling more.

I was amused, though, when I found he wrote of me: "She needs to learn that she doesn't need to do everything by herself. All the time. She can and should ask for help." That's so completely not me! But I guess it's something to carry with me as a I worry about what will happen at the office during my forced absence.
Posted by The Gal Herself at 8/05/2011 08:47:00 PM