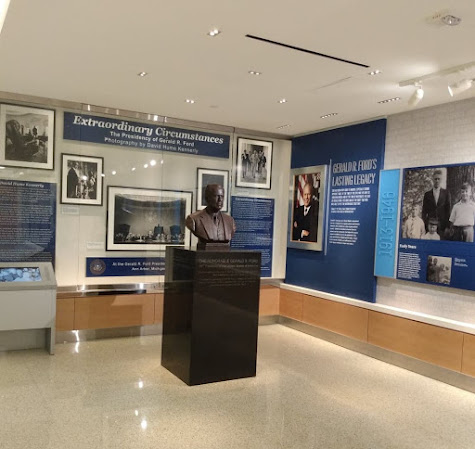 I flew in to GRR in Grand Rapids, which is known as Gerald R. Ford International Airport. On my way to the baggage carousel, I got my geek on and checked out exhibit devoted to its namesake. It reminded me of my first Presidential campaign, when my choices were Gerald R. Ford and Jimmy Carter.

My choice was between two public servants, two intrinsically decent and patriotic men. How lucky I was!

I'm hoping that, when this sad chapter in our history is over, we will go back to having an intrinsically decent and patriotic career public servant at the helm. One who isn't in office to aggrandize himself or avoid prosecution from the SDNY. One who doesn't dismiss soldiers as suckers and losers. One who will denounce white supremacists.

It occurred to me that, if we really want to "make America great again," we have no choice but to vote for Joe Biden.