He's my President, too

Donald Trump is in the hospital with the corona virus. Naturally, I am very upset about this. First of all, he is my President. His illness throws both national security and the election process into chaos at precisely the time we don't need more chaos. Plus, he's a human being. I take no joy in anyone's illness. Even someone who flouted the very protocols that could have kept him safe. I pray that he recovers, just as I pray that everyone recovers from Covid19.

But here's the pebble in my shoe. The annoyance that makes me crazy every time I check on my President's condition. While I've never had the corona virus, I did suffer a bout of pneumonia when I was in my 30s. It was not a moral failing or a sign of weakness. It was an illness.

Yet four years ago, Donald Trump mocked Hillary Clinton for having the nerve to get sick with pneumonia during a campaign. He portrayed her as unfit to lead, just because she fell victim to an illness.  His followers thought this was funny. A knee slapper.

I know there are Trump supporters who decry how mean and hateful "liberals" and "progressives" are to Donald Trump while conveniently forgetting the above. Or how he mocked John McCain's military service and a reporter's physical disability and the Khizr Khan family. Or most recently, implied that Justice Ginsburg's grieving granddaughter lied about her grandmother's dying wish. These are just off the top of my head. His penchant for cruelty is well documented.

Because he is my President, I would prefer he be a role model. That children learn how we should treat one another by watching him. But I have given up on expecting to ever see that from him.

But also, because he is my President and a fellow human being, I will continue to monitor news reports and hope that he's resting comfortably. And I'll close with this touch of class. 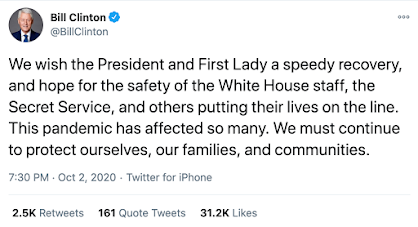