How to describe this week?

•  I aced a presentation. My internal agency team was, per usual, skeptical about my abilities and my work product. But my client was happy and impressed.

•  Even better, a client at the same company -- one I worked with in years gone by -- specifically requested my help on something. If this continues, my internal agency team will have no choice but to get out of my way and let me work.

Oh, dear Lord, how to start?

• A shooting on the WIU campus, in the very dorm where my nephew was studying! He's fine, but it was terrifying for all of us. What on earth would possess a college student to bring a gun to his dorm room in the first place?

•  My oldest friend suddenly had surgery on her bladder. She's had an infection for three years that hasn't responded to treatment. They finally isolated the problem months ago but were slow to act on it. The reasons were logistical and financial, and since she's on Medicare/Medicaid she really doesn't have much say in the matter. All of a sudden on Tuesday, they told her to show up at the hospital on Wednesday! I don't like the sound of any of this. But then, she did need the surgery if she's ever to feel relief and I guess it went well. I got lots of really loopy texts from my doped up friend.

•  My friend John is "feeling rundown." No fever, but no energy, either. He's a 65-year-old diabetic who battles congenital heart disease, so naturally I'm worried. Also, he's been frequenting his favorite bar regularly. He assures me it's safe because they have given him his own "socially distanced covid corner table." I want to yell, "There's a fucking pandemic! Watch TV and drink at home!" But I nag John too much as it is, so I'm trying mightily to keep my mouth shut about this. He texted me last night but he didn't mention his health, which I guess is a good sign. He just wanted to commiserate because ...

•  Ruth Bader Ginsburg died. In February 2016, when Justice Scalia died, Republicans said it was too close to the November Presidential election for Obama to nominate a successor. In September 2020, the same Republicans are saying Trump should name RBG's successor, even though we're having a Presidential election in less than 60 days. They not only deny science, they disregard calendars. They are ... what's the word I want? ... oh, yeah! They are assholes. 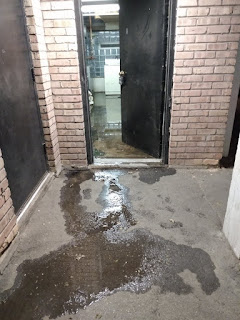 •  Then there's this: One of my neighbors knocked on my door last night to let me know there was water seeping into the laundry room. I went down there with her and damn, she was right. Water was also flooding out of the boiler room next door. Now what? I reported it as an emergency and both the electrician and the plumber came over. It seems the boiler's "automatic feed water valve" broke. I have no idea what that means, other than WATER! Here's a photo I took for the management company (they seem to feel this could be the result of negligence on the electrician's part when he fired up the boiler, and they want evidence).

I have a ton of work to do this weekend, but I'm not touching it until tomorrow. I need a day to rest and recharge.