Look at the belt 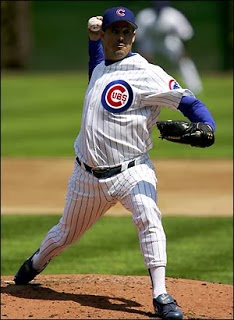 This is Greg Maddux, pitching for the Cubs at age 40. He was in good shape for a 40 year old man: able to strike out major league batters, hit the occasional homerun himself, and be paid millions of dollars a year. He was strong enough to be known for making every start, not for time on the DL.

But the belt is riding lower than it did when he was 20. It's an accommodation to the passage of time.

Alex Rodriguez is 38 and the league believes he's dealing with age with performance enhancing drugs. He will spending the 2014 baseball season in street clothes.

Greg Maddux was just inducted into the Baseball Hall of Fame with more than 97% of the votes.

I hope young people look at the belt and learn something.

P.S. I love Greg Maddux. I have enjoyed this week so. Can't wait for the ceremony this summer!