Saturday 9: Back to Black


1) Black is this week's signature color because Friday, November 29, was "Black Friday," when retailers cut their prices and consumers flock to the stores. Did you score any "Black Friday" bargains? Well, not a bargain exactly. Our local, independently owned bookstore donated 10% of all of today's sales to the local homeless shelter. Naturally, I had to go out and get behind that!

2) Legend has it that Black Friday began as a neighborhood phenomenon among storeowners in Philadelphia back in the early 1960s. What else comes to mind when you think of Philly? Cream cheese

3) Feasting and football are also popular Thanksgiving weekend pastimes. Do your Thursday-Sunday plans include pigging out or watching a game? Nope

4) At Thanksgiving dinners, Crazy Sam's homemade gravy is always a hit. (Probably because she's so generous with the cognac, which gives the gravy a nutty taste.) Do you have a signature dish? I'm sorry but I'm not much of a cook.

5) Among the biggest the Black Friday advertisers are Target, Kohl's, Macy's and 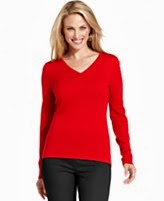 Best Buy. If you could have a $100 gift card to any one of those stores, which would you choose? Macy's. And I think I would use it for some more sweaters. I like their Charter Club sweater collection.


6) You're in a public restroom that offers both paper towels and a hot air hand dryer. Which one do you choose? Paper towels. My hands just never feel dry otherwise.

7) While Back to Black is the best-selling Amy Winehouse CD, her first was called Frank, named for her hero, Frank Sinatra. Tell us about someone you inspires you. I was just thinking about this! (See the post below) Streisand.

8) Do you consider yourself a pessimist or an optimist? Optimist

9) Who was the last person you spoke to on the phone (a verbal conversation -- not an exchange of texts)? My oldest friend called me just to blab yesterday.