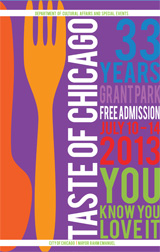 My nephew and I got to The Taste of Chicago today just before 1:00 … and spent six hours there! It was impressive how he could put it away. We hit all three pizza booths (returning to one of them twice), as well as Billy Goat Tavern (twice), The Fudge Pot, Eli's Cheesecake and Rainbow Cone.

We had a good time. He's a very bright and sweet boy. At 13 he has discovered staying up late and sleeping in and really enjoys it. He's spent the summer on the computer, playing basketball with his buddies and flopping around in the above ground pool in the backyard. He likes creative writing and thinks he's good at it, and that's the class he's looking forward to most when school starts.

He can stubborn. We both got sunburned, but then I can get sunburned waiting for the bus. Six hours in the summer sun can toast anyone. I kept trying to get him slather on the sunscreen but he was very resistant. Especially about his face. I finally got him to put some on his arms, but it was a battle. 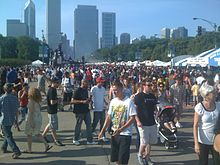 The Taste itself was fun for me, too. It's smaller this year -- fewer, but better, vendors and just 5 days instead of a week. The crowds, while still prodigious, are smaller and less ... well ... ganged up.

My highlights: (1) Every time I visit the Taste I try to sample something new. This year I went to the Kasia's Deli booth and got the strawberry/cheese blintz with chocolate sauce. I also really loved the peach cobbler from BJ's, but I had that last time. (2) Some CPS high school kids interviewed me for their class project, thinking that I was the happy mother of a student. Also, we rode the train downtown with my nephew's best friend, who didn't believe that my kid sister is actually younger than me. So that took some of the sting out of last Tuesday night's "senior moment."