I love this movie 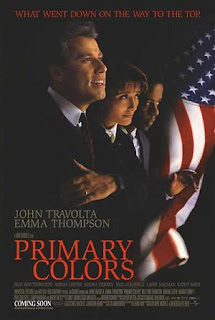 Primary Colors is the "fictional" story about a charismatic (and prematurely gray) governor of a small, poor Southern state who -- with the help of his smart-as-a-whip and foul-mouthed Yankee wife -- overcomes the odds and a sex scandal or two to win the Presidency.

John Travolta does a wonderful job as Bill Clinton. And it reminds me of how much fun the 1992 and 1996 campaigns were to work on.

I'm working the phones for Barack Obama tomorrow afternoon. My heart isn't really in it, but I want to know when I go to sleep on Tuesday night that I did what I could to get him re-elected.