Well, at least this won't be happening anymore 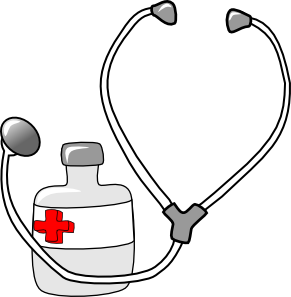 My doctor explained the results of my ultrasounds yesterday afternoon. I have a very large (16 cm long) ovarian cyst, as well some less consequential, small fibroids on my uterus. She says the cyst is likely the culprit for all my complaints, is just over 6" long and not very wide. She likened it to a desk stapler.

The good news? The symptoms of an ovarian cyst are my symptoms:
• Dull pressure or pain
• Pain during urination and bowel movements
• Frequent urination (hence the timing of this post)
• Weight gain
• Fatigue

My GP is not a gynecologist and sent the films to him yesterday. I'll give his office a call in a few hours (not everyone wakes up at 4:00 to pee) and see what our next steps are. My GP did make it clear that if she was my treating physician, she would recommend a hysterectomy. My uterus is compromised and that cyst is too large to disappear on its own. Because it's so long, it's pressing the organs all around it.

And besides, I'm sick of all the symptoms above! That was the point of all this -- to isolate what's wrong and treat it.

HOWEVER, I don't want to be cut open. That means I'll have to inconvenience one of my friends -- right now, Kathleen looks like my lucky first choice -- to take me home from the hospital. I learned before they won't let you take a cab. And it could mean a lot of time (up to 6 weeks!) off work! I know they could get by without me, but do I want them to know they can get by without me?

However, I'm postmenopausal, which puts me at increased risk of ovarian cancer. So this has to be done. At the very least, that cyst has to be biopsied. My GP said I "shouldn't worry" about cancer, but that doesn't mean it's not cancer. That can just mean that worrying does no good. She doesn't know me well. Worrying is what I do.
Posted by The Gal Herself at 7/30/2011 04:21:00 AM