Nearly 30 kids have been gunned down on the streets of Chicago this year. 30 children dead, and many of their murderers were also under 21.

Naturally I'm heartsick that the Supreme Court has chosen to strike down Chicago's gun law, which made it easier to police to try to stem the obscene tide of blood that neighborhoods are drowning in. But I know guns aren't the only problem.

The parents of Blair Holt have been making public appearances addressing Chicago's tragedy. And no one has more right than the Holts to discuss gun violence in this city. Anne Nance-Holt was a commander in the Chicago Fire Department and her husband, Officer Ronald Holt, was one of Chicago's finest when they lost their son in the Spring of 2007. An honor student, Blair was murdered on his way home from school, shot by a gangbanger who got on a public bus and opened fire. Blair pushed his classmate onto her seat, out of the line of fire. She sustained a gunshot to her foot and has recovered completely. Blair Holt's last words were, "Tell my mom and dad I love them."

Because of their life experience, I take the Holts' opinions on the culture of violence very seriously. They blame the parents even more than the economy, saying that the hopelessness that breeds violence comes from a generation that doesn't understand the consequences of their own actions, who haven't been taught to value life. 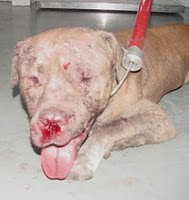 I am trying to make sense of this, and I return to a hideous statistic: 1 out of 6 Chicago schoolchildren has attended a dogfight. Violence as entertainment. Killing = Victory. Enhancing one's self-worth through bru 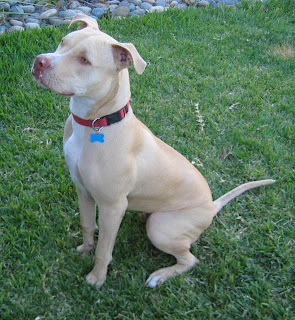 Please consider supporting your favorite humane society and increasing the awareness of this problem. I believe it will help all of our souls, and it certainly can't hurt.
Posted by The Gal Herself at 7/31/2010 03:24:00 AM