Now THIS I was in favor of 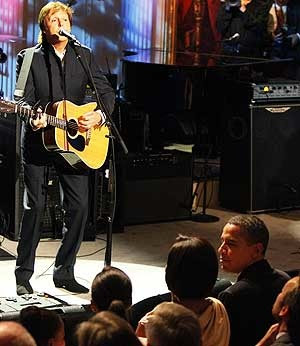 Late last month I expressed my frustration and disappointment that President Obama hasn't been spending more time down in The Gulf. While I don't take credit for the White House's increased attention to the optics of the oil spill, it must be noted that the President is doing more to indicate that he's on it -- intellectually and emotionally -- including an email, which I appreciated.

So while I understand how many might feel that President Obama should be more focused on the devastating events down South, I REFUSE to listen to anyone rip on him for honoring Sir Paul in the East Room last Wednesday.

Instead I'm pissed that it wasn't declared a national or perhaps international holiday. Guess I'll just have to settle for seeing the official celebration of my favorite Beatle (oh, hell, one of my favorite PEOPLE) on PBS at the end of July.
Posted by The Gal Herself at 6/05/2010 08:07:00 PM