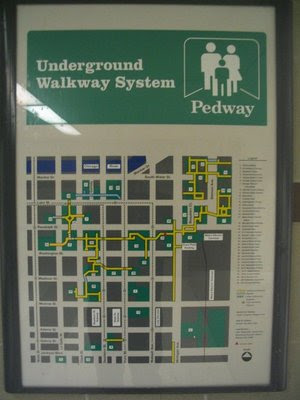 "Couldn't you just take the Pedway?" my best friend asked when I told him I was unable to cross Michigan Avenue (see below).

Damn! He's right. I could have gone into Macy's, taken the escalator to the lower level, and then follow the Pedway under Michigan Avenue. No Black Hawk fans would have been crowding the underground footpath because you can't see the street from there!

It never occurred to me. It never occurred to the policeman I spoke to, nor to the fan who overheard the cop and I in conversation. Yet my best friend, who lives in Denver, suggested it. I told him he's smarter than he thinks.
Posted by The Gal Herself at 6/11/2010 08:31:00 PM