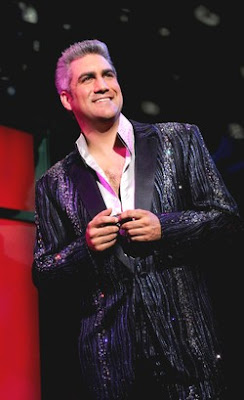 I saw the Broadway in Chicago production of Grease, with Taylor Hicks, last night at the Auditorium Theater, and I had a wonderful time. This is largely because, as they say, a girl never forgets her first, and this show reminded me of a couple of notable firsts in my pop culture-loving life.

1) Grease. It was one of the first big musical productions I ever saw live. About this same time I also saw A Chorus Line for the first time. I fell in love. Not only with big musicals, but with living in Chicago, a world-class city with a flourishing theater community. (Grease originated in Chicago, you know.) So last night, while I was watching Danny and Sandy and Doody, I remembered the teenaged Gal I was the first time I met them, live, at the Civic Opera House, when I was also introduced to all my city has to offer.

2) Taylor Hicks, my first American Idol. I'd avoided the show until season 5. Then, for some reason, when it was narrowed down to 12, I tuned in. Once I saw Taylor Hicks among the others, he was my candidate. Sure, I got a kick out of Chicken Little. Rocker Chris Daughtry seemed somewhat uncomfortable with the middle-of-the-road, adult/contemporary format. Elliott Yamin screwed up the lyrics to Elvis' "If I Can Dream," an unforgivable sin in this Gal's book. I didn't really find any of the women memorable. But then there was Taylor Hicks. Good-natured, corny, with terrific pipes and blue-eyed soul that was part Johnny Rivers/part Michael McDonald, and yet somehow all his own. Watching Taylor Hicks pick off his competition and rise to the top hooked me, and I've been an AI addict ever since.

Last night he was Teen Angel, so his big number was "Beauty School Dropout." His blue glitter jacket was worth the price of admission, as was his entrance, emerging from a heavenly ice cream cone. He was in fine voice, and his style is well-suited to the nostalgic material. He connected well to the audience, so I was sorry to see him go. I wondered why they didn't just dye his trademark gray hair and let him play Danny. After all, Danny is usually played by actors who can sing (Barry Bostwick on stage, John Travolta in the movie). Why not turn it around a little and cast a singer who can act? Why not give it to my American Idol?

Because Taylor Hicks is a clod who can't dance for shit. When he came out at the end with the entire cast to reprise the big numbers, he soloed on "Grease" and was terrific. He even did a harmonica solo. But then he moved to the back of the stage. Waaaaaay back. Because he knows he can't dance for shit. It's not just his feet, it's his hands, too. Watching him try to "hand jive" was priceless.

The thing of it is, the audience still loved him. Filing out of the theater, people of all ages were laughing (affectionately) and imitating his awful moves. Like me, many were disappointed that he was onstage for such a limited time. I heard, "Jennifer Hudson's got an Oscar and he's doing this," as though as an American Idol winner he should be doing more prestigious things.

Maybe. Maybe not. There's a delightful lack of pretension to Taylor Hicks. He doesn't seem to feel like he's slumming as he struts around in his glitter jacket or whips out the harmonica. He seems to know that all he's doing is giving the crowd a little pleasure on a cold, January night. It's not lasting Art-with-a-capital-A, but it's fun. Perhaps that's his calling. Fun is certainly a worthy goal these days.