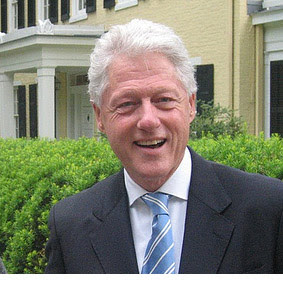 So sing the party faithful. We love Bill Clinton. Those who support Obama, Edwards, Biden, Richardson, Dodd … we might not be in Hillary's camp, but we still have a soft spot in our hearts for Bill. We like that he's treated like a rock star when he travels abroad. He makes us feel like winners again. We fondly remember world peace and a bitchin' NASDAQ.

It occurred to me this morning that Bill is why Hillary's nomination is inevitable. The political pundits were talking about the early primaries. After Iowa, New Hampshire, and Nevada, lower tier candidates will begin dropping out because their donations will dry up. That's when it hit me: because of Bill, because of their sentimental attachment to the Clinton Administration, it will be easier for paid campaign workers, volunteers and contributors to switch their allegiance to Hillary.

I worked very hard for Senator Kerry in 2004 and was there as first Dean and then the Clark and Edwards supporters were folded into our campaign. The Deanie Babies had a hard time because ideologically and emotionally, they didn't cotton to Senator Kerry. They weren't working for John Kerry, they were simply working to defeat George W. Bush.

I predict there will be no lack of enthusiasm when loyal, involved Democrats hop on board the Clinton Bandwagon because it is, indeed, the Clinton Bandwagon. "Two for one" again, just like in 1992. So unless there's a seismic shift in voter mood between now and the Nevada caucus, Hillary will be our nominee.
Posted by The Gal Herself at 7/29/2007 09:38:00 PM