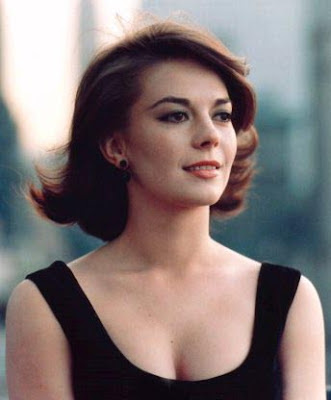 Natalie Wood. Isn't she lovely? When I was a little girl, she was a BIG movie star. Maybe not Julia Roberts huge, but certainly Sandra Bullock big. From 1947, when she was a child actress, through 1966, she worked almost continually. She had three Oscar nominations before she was 30. She took off for a while to have babies and be the wife of TV star Robert Wagner. She was attempting to jumpstart her career again when she died mysteriously in a boating accident in 1981. She was only 43.

I'm sorry that she really doesn't have icon status. You don't see her in poster shops or on handbags, a la Audrey Hepburn or Marilyn. Yet Natalie Wood accomplished so much -- successfully moving from child star (Miracle on 34th Street) to teen attraction (Rebel without a Cause) to romantic love interest (Love with the Proper Stranger) to big-budget musical star (Gypsy, West Side Story).

When I was a kid, she was GLAMOUR: a back-combed, bejeweled Hollywood glamour that was more elegant than Mama Michelle Phillips but nowhere near as campy as Liz Taylor. As I watch her films now, I see something else about her, beyond the movie-star aura:

There was a tremulous quality to her. Even when she was playing a 50s sexpot or a 60s Cosmo Girl, you knew that she wasn't as tough as she seemed, that the bravado compensated for some terrible hurt or disappointment she'd endured. Her sensitivity and longing never seemed too far away from the surface. There was also something tightly-wound about her, something unpredictable that made her a little dangerous. She could snap at any time (and she did, most spectacularly, in Splendor in the Grass). Her emotionalism and vulnerability pulls you in.

Had she lived, she would be in her late 60s now. I don't doubt that, if she wished to, she would still be working. It would have been interesting to see how she evolved into a middle aged and older woman on screen.
Posted by The Gal Herself at 7/30/2007 01:24:00 PM