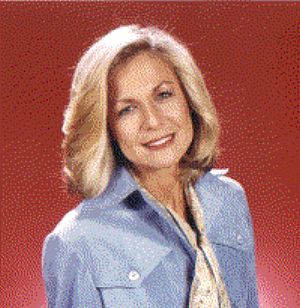 I like Meredith Vieira and am glad she's the one NBC tapped for the Today Show. During the hype leading up to her Today debut, many articles and news pieces used Meredith's quote about not hiding her femininity: "I'm going to be the broad in broadcasting."

Ding, ding, ding! Where have I heard that phrase before? In the early 1980s, when Jessica Savitch was the rising star at NBC News, she laughingly told the story of her discouraging experiences in college, "In those days, there were no broads in broadcasting."

There was something very moving about Jessica Savitch. Like Meredith Vieira, she had a smooth, low-pitched voice. (A voice that I, with my obnoxious squeak, would kill for.) She seemed on top of it and knowledgeable, but there was an accessibility about her, too. You sensed that she knew her stuff not because she was naturally brilliant but because she'd done her homework. She was great looking, to be sure, but not in the creamy, beauty queen way that Diane Sawyer is. You could imagine Jessica wrestling with hot rollers (it was the 1980s, after all) or a bad skin day. In short, she seemed like any of us -- if we worked hard enough. She didn't make it look easy, but she did make it all look worthwhile and more than a little fun.

Her rise at the network was meteoric. And, according to the books I've read, it was a case of "too much, too soon." Barbara Walters had gone to ABC, women were suddenly in vogue, and there really weren't that many newswomen at local stations. Lots of "girl reporters" covered soft features, but the networks were suddenly hungry for women who could do hard news. NBC found someone in Philadelphia who clicked with viewers and they brought her to Washington to cover the Capitol. She wasn't ready. But she had signed an enormous contract and didn't tell anyone how ill-prepared she was. NBC wanted their money's worth and made her the weekend anchor of the nightly news. She was a substitute co-host on both the Tomorrow Show and the Today Show where Meredith sits now. While audiences loved her, and she was featured in magazines and in local newspapers, she simply wasn't ready. She wanted to do well ... she had studied Edward R. Murrow and wished to follow in his footsteps. Instead she cracked under the pressure.

Behind the scenes there was a turbulent relationship with Ron Kershaw, a broadcast journalist she just couldn't stay away from -- a mentor she both loved and depended upon. Between 1977 and 1982 there were two marriages, both ending badly. The first was to an older, wealthy businessman who was besotted with her. Seems he finally got sick of being treated like her dog walker and after little more than a year, they divorced. She almost immediately remarried her gynecologist. Within months, he hung himself in their garage. She had a stalker who somehow got past NBC security to confront her in an empty office.

All of this went on while she maintained her Golden Girl persona on air. Then, on October 3, 1983, she melted down on live TV. She was on camera less than a minute, doing a quick news update between sitcoms, and became incoherent. Millions of viewers saw her slur her words and lose her place. People called the switchboard, afraid she was ill. She said it was a combination of cough syrup and a malfunctioning teleprompter. Her agent said she'd suffered a knock on the head earlier in the day. Her coworkers weighed in by taping straws to the nostrils on her official portrait in the hall at NBC.

On October 23, she was dead. A car accident after dinner with a new man.

There's a fictionalized, romanticized version of her life and love affair with Ron Kershaw. It's Up Close and Personal, with Redford and Michelle Pfieffer. If only she could have lived the life Hollywood made up for her. There was a poignancy about her, a humanity, and she had a gift for connecting with viewers. She also worked very hard. I believe she deserved better than life handed her.

There's a scholarship program established in her memory at her alma mater in Ithaca, ensuring that it will be easier for broads to get into, and succeed in, broadcasting.
Posted by The Gal Herself at 10/18/2006 08:48:00 AM