... since I rhapsodized about Anthony Rizzo. So let's remedy that right now. Lookee here!

In 2008, when he was still in his teens, Anthony was diagnosed with cancer. At the same time his grandmother was fighting her own losing battle with the disease. He learned the hard way that when a family member has cancer, it impacts the whole clan. He's made helping children and families cope with cancer his off-field career.

Here in Chicagoland, he's been an angel to the parents at Lurie Children's Hospital. In 2017, his foundation built the new waiting room ($3.5 million) so that no parent will ever have to be uncomfortable while visiting their kid. Last year, he donated another $2 million to help families make ends meet while their child is being treated. (I read a note from a grateful mom who said that this donation made it possible for her other children to be in safe, secure daycare while she was at the hospital because no mother can be in two places at once, least of all the mother of a sick child.)

This year, for Christmas, I'm giving as many Anthony Rizzo Family Foundation gifts as I can. I know the money will go to a good cause. 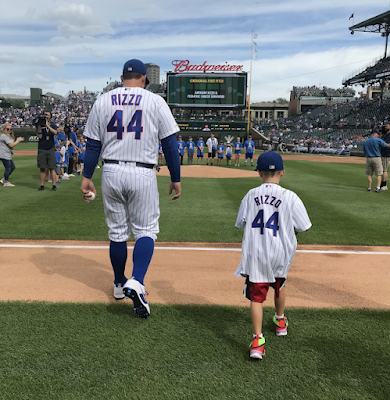