Four stars for these two stars 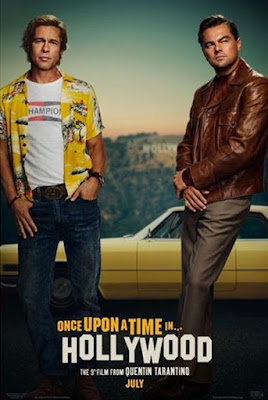 Once Upon a Time in Hollywood is my favorite Tarentino since Pulp Fiction. It's really well done, highly original, and filled with very good performances.

Yes, it's violent. It's Tarentino, so it's going to be violent. But it doesn't wallow in it, or encourage us to cheer it, the way Inglorious Basterds did. It's actually more about tension, and the final release of it, than any cathartic joy in bloodshed.

DiCaprio was good. Of course. He usually is. He is fearless in this role. His hair is dumb, his movements are clumsy, he cries so often and easily it makes us uncomfortable. Yet he's also vulnerable and authentic in his desperation, and so he's touching.

Brad Pitt was the revelation for me. I haven't seen him this good since Money Ball. He's not especially heroic or even decent here, but he is sane. And in this milieu. sanity stands out. It's not a flashy role -- I imagine most actors would have preferred Leo's part -- but he's solid and gives the movie its core.

There are about 2 gazillion 50s and 60s pop culture references in this movie, and I got most of them. I believe Tarentino actually spent more time in front of the TV or at the movies than I did!

Do I recommend it? That depends on you. It's a movie set in Hollywood at the time of the Tate-LoBianco murders. It's by Quentin Tarentino. Consider all that before you purchase your ticket.