1. Do you ever doubt the existence of others than you? No.

3. The person you would never want to meet? Donald J. Trump. My friend Henry lives in Key West and went to visit his mother and brothers in Puerto Rico in November 2017, months after the hurricanes. Henry knows a little something about storm preparedness and recovery. His tales about life in San Juan were harrowing. Yet the President not only refuses to accept responsibility, he denies the reality of the death toll. Donald J. Trump seems to think he can choose which Americans he will serve. I remember hearing someone on TV say, "You people (Democrats like me) just hate him." I'm afraid it feels like our President just hates us.

4. What is your favorite word? Gubernatorial. I love it that we're having an election for governor here in IL, so I get to hear it more often.

5. If you were a type of tree, what would you be? Maple. Like me, it flourishes in the midwest.

6. When you looked in the mirror this morning what was the first thing you thought? That pimple is just about gone. (Hey! You asked!)

7. What shirt are you wearing? My Wrigley Field centennial t-shirt. This is how a new, unwashed one looks. Mine is nowhere near as bright. 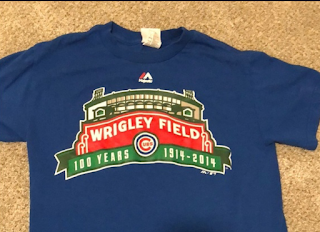 8. What do you label yourself as? An American woman.

10. What were you doing at midnight last night? I crashed on the sofa. I hate when I do that.

11. Favorite age you’ve been so far? My mid 30s. I was happy in love, my career was getting traction, I felt fit and sexy.

12. Who told you they loved you last? My friend Henry. His friend, Juana, was laid to rest this week. With her loss, he reached out to tell me he how much I mean to him. It was touching.

14. What is your current desktop picture? 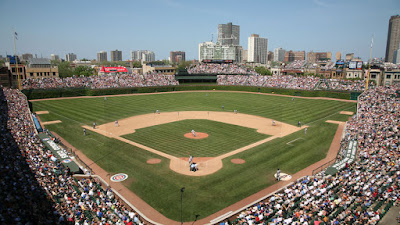 16. The last song you listened to? "True" by Spandau Ballet.

17. You can press a button that will make any one person explode. Who would you blow up? I wouldn't.

18. Who would you really like to just punch in the face? The Secret Service would arrest me.

19. If anyone could be your slave for a day, who would it be and what would they have to do? I don't ever want a slave.

20. What is your best physical attribute? (showing said attribute is optional) My green eyes.

21. If you were the opposite sex for one day, what would you look like and what would you do? I'd have a beard, and I'd go to the ballgame and pee. I am always amazed at how short the lines are at Wrigley Field mens' rooms.

23. What is one unique thing you’re afraid of? Squirrels. When I was a little girl, I used to get up really early and feed a squirrel through the mail slot in our screen door. I fed him my dad's favorite caramel corn. When my father found out where his caramel corn was going, he told me this harrowing tale of a little boy -- just my age! -- who fed a squirrel. The squirrel had rabies and sunk his teeth into the boy. The police had to come and shoot the squirrel. Even in death, those teeth didn't release the kid. The dead squirrel was on his arm in the ambulance to the hospital! Then the little boy had to get sixteen (16!) shots so he wouldn't get rabies, too. In retrospect, I know of course my dad made the whole thing up. But the story still stays with me.

24. You can only have one kind of sandwich. Every sandwich ingredient known to humankind is at your disposal. Turkey (dark meat only).

25. You just found $100! How are you going to spend it? I'd have Cute Handyman come over and finally install the new ceiling fan in my bedroom.
26. You just got a free plane ticket to anywhere in the world, but you have to leave immediately. Where are you going to go? Colonial Williamsburg. I long to go back.

27. An angel appears out of Heaven and offers you a lifetime supply of the alcoholic beverage of your choice. “Be brand-specific” it says. Miller Lite. (Yeah, I'm a cheap angel's dream.)

28. You discover a beautiful island upon which you may build your own society. You make the rules. What is the first rule you put into place? Sliced tomatoes will only be served upon request. It would be such a delight to know that I'll never have to peel a tomato off my sandwich ever again.

29. What is your favorite expletive? I don't know that it's my favorite, but I do say the f-word a lot.

30. Your house is on fire. You have just enough time to run in there and grab ONE inanimate object. Don’t worry, your loved ones and pets have already made it out safely. So what’s the one thing you’re going to save from that blazing inferno? My purse. It's big and encompasses a multitude.