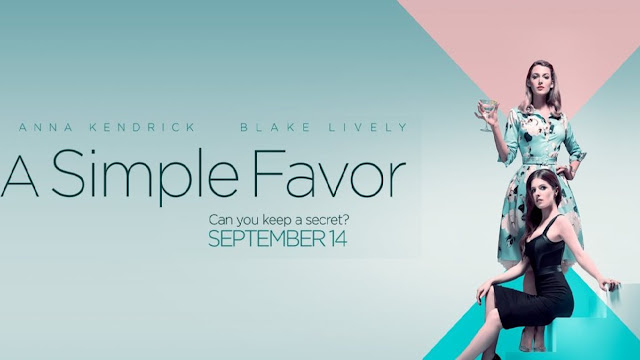 I spent a lovely afternoon drenched in sex, deception, martinis and, ultimately, murder. I went to the movies and saw A Simple Favor. It was terrific.

Deviously plotted -- there was only one plot point that tripped me up -- and funny and silly. With beautiful people in beautiful clothes in beautiful homes. It even has a crazy cat lady in a burned-out mansion! It's a less violent Gone Girl, a less weighty Girl on the Train. If Hitchcock had made chick-flicks, he would have made A Simple Favor.

I love Anna Kendrick in this because she reminded me of me. I feel about as glamorous as a glass of water, especially next to my friend, Joanna -- she who can accessorize anything, has two ex-husbands and assorted lovers in her past, and orders drinks I've never heard of. I look at Joanna and think, "How does she do it?" and "I wish I was her," just like Stephanie.

Blake Lively as Emily was a revelation. I see her all the time. She's on the celeb websites as the real-life wife of Deadpool superstar Ryan Reynolds and she's a popular fashion magazine cover girl. But I've never before seen her act. She has a lot to do in this movie: alternately dangerous and unlikable and still charismatic. Emily's wheels are always turning.

Go see this movie before someone ruins the plot for you. Since the climax is incongruously, shockingly funny,* I'm tempted to ruin it for you now. So stop reading and go to the movies!