Every day, and for the rest of his life 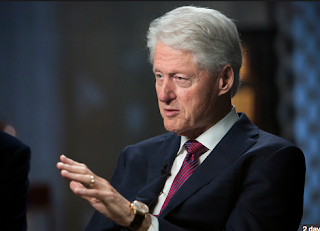 Have you ever worked on a political campaign? It bonds you to your candidate. By donating your time, your money and your heart, you're invested in their successes and feel a sense of responsibility for their missteps.

Bill Clinton's was the first campaign I ever really threw myself into. I believed in him, with all my heart. Then he broke it.

His behavior in the Lewinsky scandal was ugly and cowardly. I knew it as I was watching it unfold in real time. I know it now. For while I am a loyal Democrat and a devoted Clintonista,* I am also a woman.

As Bill Clinton promoted his new book on The Today Show, I was surprised and saddened by how tone deaf his responses were when (inevitably) asked about Ms. Lewinsky and the #MeToo movement. Here's what he said to Stephen Colbert:


I can't speak for Hillary or Chelsea Clinton or for Monica Lewinsky, but as The Gal Herself I can say:
STILL NOT ENOUGH.

I want Bill Clinton to apologize to me personally. I want him to lock eyes with me when I tell him what a profound disappointment he is ... that I appreciate he's a good man who has done good things for us all, but he could have been a great man. Instead he squandered it for no better reason than he couldn't keep it in his pants. I want him to tell the Secret Service it's okay after I slap him across the face. (He deserves a slap across the face, specifically, for referring to Monica Lewinsky as "that woman" -- as in "I never had sexual relations with that woman.")

But this isn't about equivalency. It's about hurt and atonement and healing. Bill Clinton has an opportunity to save his legacy -- which matters to us lowly campaign workers who helped put him in office -- and to finally be a great man. He has to stop being defensive. He has to acknowledge what he did to "that woman" -- who is now 44 years old and has lived more than half her life as a punchline to a dirty joke because of this scandal. Monica Lewinsky is the victim here, not President Clinton. He needs to say that. He needs to apologize every day, to all of us, and for the rest of his life.

I hope he will. I hope he doesn't disappoint me again.