I Miss My Mommy

I'm having a hard, sleepless night. When I got home from work tonight, I saw I had a message. From my doctor's office. Her nurse wanted to discuss my Saturday morning mammogram with me.

I haven't ever received a call like this. Previously, in 2009, I received a letter recommending additional screening because of "abnormalities," and that completely freaked me out. Turned out then I had "microcalcifications," which are nothing to worry about. But in 2009, I was still in my 50s. I'm now 60. As we age, we are at a higher risk of breast cancer. 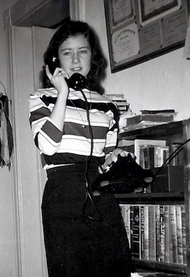 I called my oldest friend. Not only because she's my oldest friend, but because she spent more than two decades working with doctors and knows about this stuff. She never picked up. She never called back. I know she's dealing with her own formidable issues, but I also know she looks at her phone because she always wants her kids to be able to reach her. So she looked at it, saw it was me, and decided to screen me out. That hurts.

Then I called my friend Henry. He did text me, hours later, to see if I was OK. He had been in the theater and had turned his phone off. I just wanted him to comfort me a little, to distract me. There was no reason to call him back that late.

That's why I miss my mom. She always picked up and she loved to talk on the phone. She would have talked me through this.

Oh well, tomorrow morning I call the doctor's office, and we'll see what happens from there. Pray for me.