My Thursday began with a trip to the vet. Reynaldo needed bloodwork as part of his six-month exam. He was a real trooper, which was a relief because fasting for bloodwork can leave Rey feisty. His preliminary tests came back A-OK, and now we just have to schedule him for dental work in January.

Then I went to immediate care about all my scratching and clawing. Really, these bites are making me crazy! I got prescription strength ointment: triamcinolone acetonide. Hopefully it will make me feel better today, after 24 hours of use. (Please, God!)

While waiting for the doctor, I checked my phone and found that the water in my building had been turned off. Well, hell! I wasn't about to go cocoon anywhere that doesn't have a flushable toilet! So I impulsively went to the movies.

I was curious about All The Money in the World because of current events. Kevin Spacey had already completed his performance as J. Paul Getty when word of his certainly unsavory and perhaps illegal conduct came to light. Rather than risk backlash at the box office, director Ridley Scott decided to reshoot scenes of the movie with Christopher Plummer in the supporting but pivotal role. Scott had less than a month to do it. A daunting task, a prohibitive timeline. And yet he, and his cast, accomplished it seamlessly.

I'm old enough to remember the story of the Paul Getty kidnapping in real time. So I knew when to look away during a critical scene. I also knew how the movie would end. I wasn't aware of the conspiracy involved in his kidnapping, and I was impressed by both Plummer and Michelle Williams. Oh yeah, and I remain a little in love with Mark Wahlberg. (Note to self: watch more Mark Wahlberg movies in 2018.) 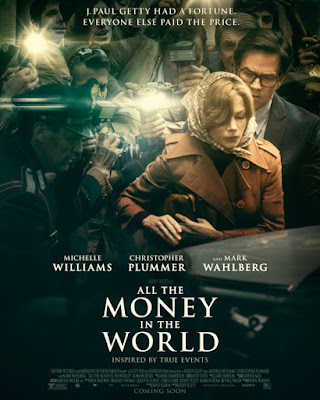