1)  Chattanooga is Tennessee's fourth largest city. Have you ever visited Tennessee? If so, where did you go and what did you see? About a year ago, I made like Paul Simon.


Since Glenn Miller's recording of "Chattanooga Choo-Choo" was awarded the first-ever gold record, we're going to devote the next questions to your firsts.

2) What was the first award or accolade you ever won? The earliest I remember is a check from the local newspaper that I received when I was 8. They ran a "teacher of the year" contest. While my teacher didn't win, my nominating essay did. I used the money to buy a Madame Alexander doll. It meant a great deal to me when I found her among my late mother's things. My mom kept that first prize all those years!

3) We know about your blog. But which was the first social media site that you posted to? (Facebook, Twitter, Instagram, Pinterest, MySpace ...) Twitter.
4) Where did you go on your first plane ride? MDW to FLL. Midway to Fort Lauderdale. My cousin Kathy and I went down to visit my uncle, who had just moved to Lauderdale. It was the summer between my junior and senior years in high school.

5) Tell us about your first cell phone. I believe it was this Motorola StarTRAC. If this wasn't the first, it's the earliest one I recall. That antenna wasn't just for show. 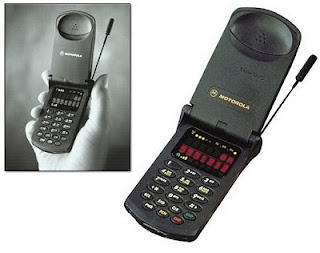 6) Tell us about your first tattoo: Where is it on your body? Where did you have it done? What does it depict? No tattoo. I have no enthusiasm for letting a stranger inject me with ink.

7) How old were you when you had your first piercing? Immediately after I graduated from high school. Until then, my parents wouldn't allow it. I always wanted pierced ears.

8) What had you been drinking the first time you suffered a hangover? Harvey Wallbanger. I've never had another. It's funny how I blame the drink, and not my own complete lack of judgement.

9) Was your first ticket for parking or was it a moving violation? I've never had a ticket.