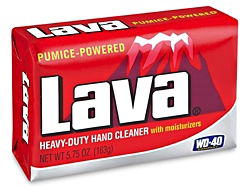 When I was a kid, we were not supposed to touch our dad's Lava Soap. My mother insisted it was too rough for our skin, and that it was only for the dark, ugly stains that our mechanic father brought home from work.

I think it's time for Bernie Brats to get out the Lava Soap. How else can they wash away the stain of helping to elect Donald Trump?

All last summer they bitched, they whined and obsessed about the Wikileaks about Hillary Clinton, Debbie Wasserman Schultz and Donna Brazile. It was as though Julian Assange had re-released Shakespeare's witches chant around the cauldron: Double, double, toil and trouble!*

I couldn't help but notice that by the time the convention rolled around, even Bernie Sanders himself asked them to shut the fuck up about it. And, shockingly, they booed him.

They also booed Cory Booker, Elijah Cummings and Stephanie Rawlings-Blake -- making sure that voters of color all over the country knew how little respect they had for black voices. I'll always wonder what impact last summer's nationally televised display had on voter suppression.

Donald Trump has said that Vladimir Putin is a smart man. He's right. Through hacking and Wikileaks, Putin manipulated Democrats into carving one another up on the public stage -- over nothing that really mattered.

No one understood this better than Bernie Sanders himself:

*Props to me for keeping the Shakespeare references from the same play. Somewhere my high school English teacher is smiling.