Yes, I am this shallow 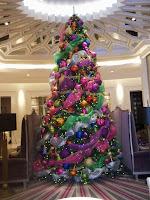 ... but in the context of my birthday and The King, it feels appropriate.

The Guesthouse at Graceland is a beautiful structure, the biggest new hotel built in Memphis in more than a century. 450 rooms, two restaurants and a bar. The staff is uniformly friendly and helpful. Complimentary water (with lemon) in the lobby. Their Christmas tree is up, so guests are greeted to the smell of apples and cinnamon (which just so happens to be my favorite).

And yet, my favorite thing about my stay here is the TV.

It's a nice big high-def flat screen. The kind I want at home but can't afford. This, while pleasant, is not unusual for high-end hotels.

What makes this TV special is that it's on when you enter the room. Softly playing "Treat Me Nice" and "Jailhouse Rock." 50s Elvis greets you! 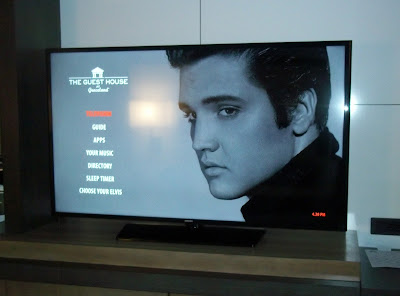 The last selection on the menu intrigued me. "Choose Your Elvis." So I did that before I even unpacked. My choices also included ...

60s Elvis, who serenades me with "How Great Thou Art" and "Viva Las Vegas." 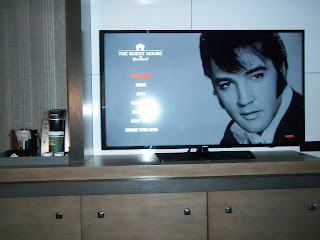 And 70s Elvis, who sings two of my favorites by the King: "Fools Rush In" and "Kentucky Rain." So naturally I settled on him. 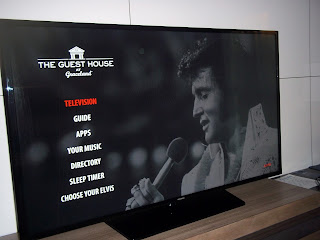 So I could sing along as I set up my toiletries in the bathroom and generally got settled in my new home away from home.

Guests also get to watch Graceland TV. I saw a special on Elvis Week, the annual celebration of his life held in Memphis every August. I knew about the candlelight vigil at Graceland on the anniversary of his death, but I'd been unaware of the symposiums and concerts and "tribute artist" (impersonator) competition and 5K run. A week! I'm a Cub fan and a Beatle fan, but I don't think I'm up to 7 days of being a fan girl. The King's faithful are hardcore!

I watched an interview with Angie Marchese, the Graceland archivist. She showed us "secrets," like the drawer in the kitchen where 6-year-old Lisa Marie wrote her name and the chandelier (Elvis really liked chandeliers) on the backstairs to the kitchen, a staircase which is unavailable to fans on the tour. A well-spoken woman in her 40s, and an archivist by trade, she talks about this stuff as seriously as if she worked for Monticello and Thomas Jefferson. I got a kick out of her.

And then there are the two specials running on a continuous loop. Aloha from Hawaii and the 1968 Comeback Special. Put a mic in that man's hands and you got magic. It's good to be reminded exactly what all the fuss is about.