My 90-year old neighbor fantasizes about me. I am totally creeped out by this.

This unpleasant chapter began last month. My across-the-hall neighbor knocked on my door. I tried to talk to him through the chain but he insists on coming in because he has a problem of some sort that he doesn't want to discuss in the hall. Thinking he may be in some sort of peril -- after all, he's a senior citizen on his own -- I reluctantly let him in. I was in my bathrobe, which reaches to my ankles. I was more covered than I am at the beach or the health club.

Turns out his terrible problem is his Comcast bill. As I review it, he tells me I look sexy. I told him that made me "uncomfortable" and ask him to leave. The next day he slipped a note under my door, apologizing and taking responsibility. I thought this was in the past.

More than a week ago, someone was insistently ringing my bell pre-dawn. Our intercom is broken, so I grabbed the robe and started downstairs to see who it was. (Another neighbor's daughter who couldn't reach her mother so tried me instead.) Walt had been wandering the halls, waiting for the paperboy, and saw me in my robe. My gray flannel, ankle length robe.

He left a note under my door, detailing that after he saw me in the hall he took a nap and dreamed of kissing me. How at first I resisted but then gave in.

I wrote: THIS IS UNWELCOME. PLEASE STOP! and returned it to the area in front of his door.

I dearly, dearly hope this ends it.

After the Orlando shooting I changed my Facebook avatar to this: 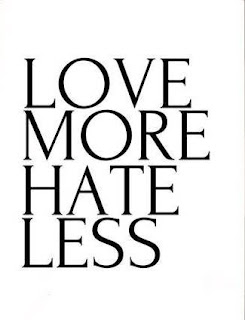 I do try to live this. I do want to lead a more Christian life. I do try to remind myself that everyone is just doing the best he/she can.

But it's hard when you don't feel relaxed in your own home. I'm pissed at Walt for being such a filthy old pig. I really am.