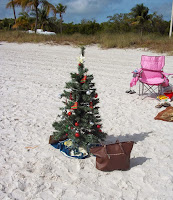 1) This song mentions golden sands. When do you think you'll next visit the beach? I'll be in Key West again for the holidays. My friend and I like to walk the beach on Christmas morning. Last year we met a lovely couple who had risen even earlier than we had and put this charming little Christmas tree on the sand.

2) Shortly after "Beyond the Sea" hit the charts, Bobby Darin  met and married movie sweetheart Sandra Dee. Her squeaky-clean image is spoofed in the song, "Look at Me, I'm Sandra Dee," from Grease. Can you name another song from Grease?  "Summer days, drifting away, but oh! Those summer nights ..."

3) Years earlier, Bobby had an ill-fated romance with singer Connie Francis. According to Ms. Francis, Darin wanted to marry her, but her father forbade it. Have you ever had a relationship that your parents disapproved of? Yes, but it wasn't a romance. I had a girlfriend in high school who made my parents nuts. She was very arty and very smart. It sounds weird, but my parents objected to her because it's when I began hanging around with her, I stopped caring about being popular. My parents had been teens in the 1950s, and for them a daughter to be proud of was a daughter who was cute, dated a lot and had a lot of clubs listed after her name in the yearbook. I was a tremendous disappointment to them, and they blamed her.

4) Bobby was a Renaissance man: Grammy-winning singer, Oscar-nominated actor, Rock and Roll Hall of Famer and an excellent chess player. Are you good at chess? I'm terrible at chess.

5) A car buff, he drove a 1960 custom car that was so unique and spectacular it's now in a Detroit museum. The bright red paint was mixed with ground diamonds to ensure that it sparkled in the sun. Each of the four bucket seats had its own ac/heat control and radio speaker. The steering wheel was slightly squared for easier handling. What features would your dream car have? A driver

6) Beyond the Sea is also the name of the 2004 screen biography in which Kevin Spacey played Bobby Darin. Who would you choose to play you in the story of your life? Carrie Fisher.


7) When he was just 8 years old, Bobby Darin was stricken with rheumatic fever, and the disease left him with a dangerously weakened heart. Did you spend much time in the hospital when you were a kid? No, but one summer did find me in the same ER three times. First I hurt my ankle jumping off a lifeguard's chair, second I tripped down the stairs and damaged my shoulder, and then I was jumping on my bed and cracked my chin on the headboard. That last one resulted in a lot of blood. My dad did what he could to stop the bleeding before bundling me up and taking me to the hospital. His shirt was still all bloody. As the doctor stitched me up, he and the nurse kept exchanging meaningful looks. Then the nurse took me to a separate room and a very nice lady came in with a file with my name on it. "Want to tell me what happened this afternoon?" she asked. "Your dad can't hear you." I was too young to understand it at the time, but clearly the hospital was suspicious of my injuries. My parents were desperately offended, but in retrospect I think it's great that the doctors and nurses were looking out for the children in my community.

8) In 1959, when "Beyond the Sea" was popular, Alaska became our 49th state. What comes to mind when you think of Alaska? The Alaskardashians -- Sarah and Bristol Palin.

9) In 1959, Conair introduced the first hair dryer developed for home use. Is there a hair dryer in your bathroom right now? Yup.