The Hills of Beverly

I went out to the West Coast to visit my oldest friend. She's been suffering a lot lately, her moods rising and dipping precariously, and she doesn't feel like she has much support. So I played cavalry and rode out to her side.

This is quite possibly the last time I'll visit her in Beverly Hills. My third trip out to see her since she moved, and I've never seen Rodeo Drive. I've never dined at The Ivy. I've never seen what makes Beverly Hills the golden ideal to so many. I told her we were spending one day in her neighborhood, taking it all in. She feels no connection to the neighborhood she lives in, so it was a revelation to her.

Now the Paley Center for Media was cool. It's a museum/research facility devoted to TV. There was an exhibit devoted to Survivor, which I couldn't have cared less about. But I really got my geek on when we came to The Soboroff Typewriter Collection. 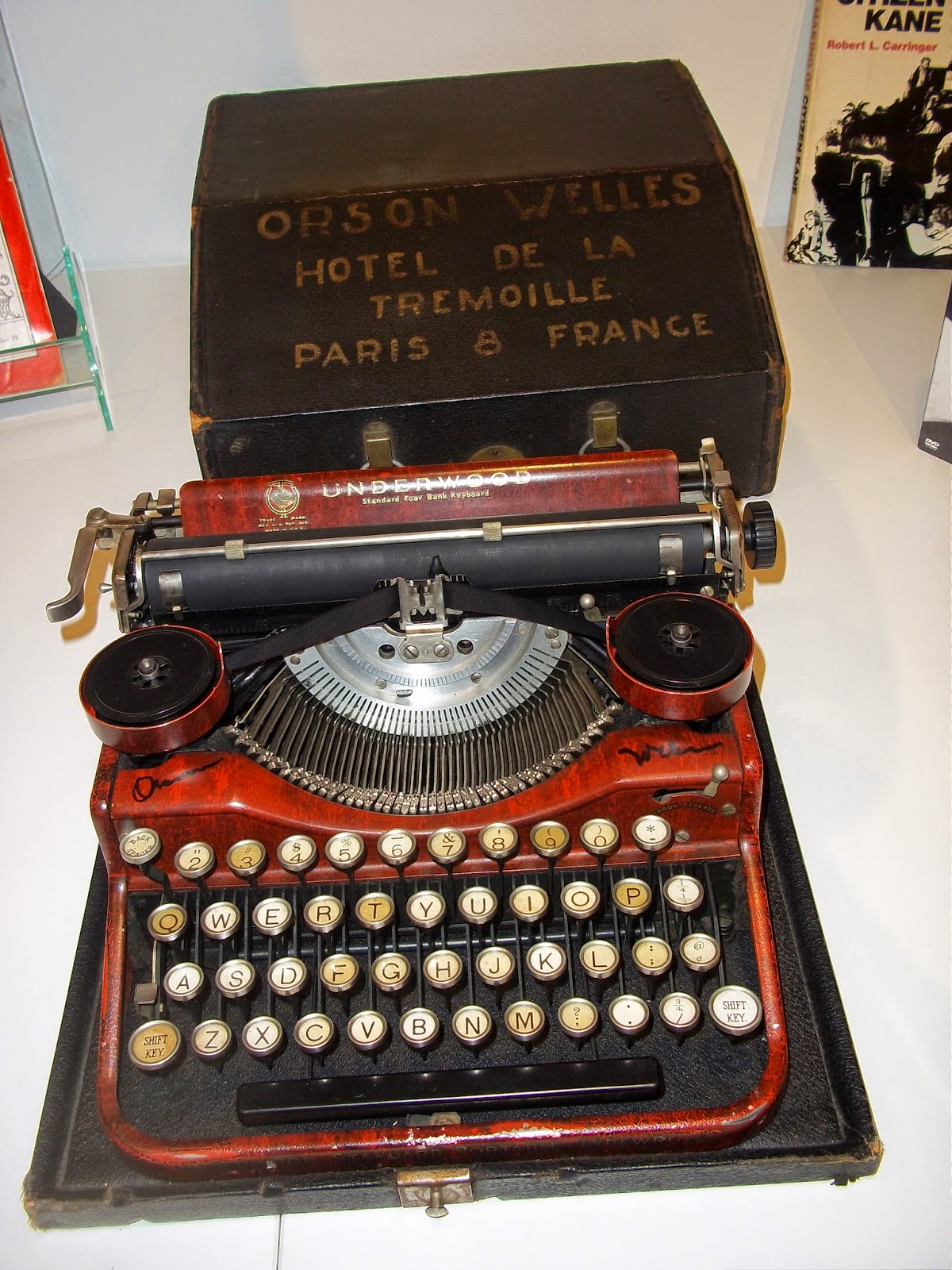 I got all squeally when I saw the typewriter John Lennon pecked away at as a teenager, living with his Aunt Mimi. Then there was the one Carolyn Wirt Keene used to compose the original Nancy Drew books. How many generations of girls learned to love reading on the pages that came from her machine? Ernest Hemingway, Truman Capote and Tennessee Williams were represented, too. I even saw a page from Tennessee's original manuscript for The Glass Menagerie displayed with the machine that created it.

By far my favorite was this one, the Underwood where Charles Foster Kane got his start. I adore it not only because I'm a big classic movie fan. Look at that typewriter case! (I checked, and the Hotel de la Tremoille is still open and still providing its guests with luxury accommodations.) I came away thinking that we've lost something, now that we're all on PCs and Macs. These new word processors have neither the charm nor the gravitas of these gorgeous old typewriters.

Then we went to dinner at The Ivy. Ever since Jennifer Aniston made a point of eating there, proudly visible outdoors and in the open, after Brad dumped her, I've noticed how often The Ivy turns up in People and Us. Bruce Willis and George Lucas seem to dine there a lot. So does Khloe Kardashian. In my midwestern head, the white picket fenced Ivy has become synonymous with Beverly Hills.

It's a nice little restaurant. More casual and more family friendly than I expected. I saw kids there, 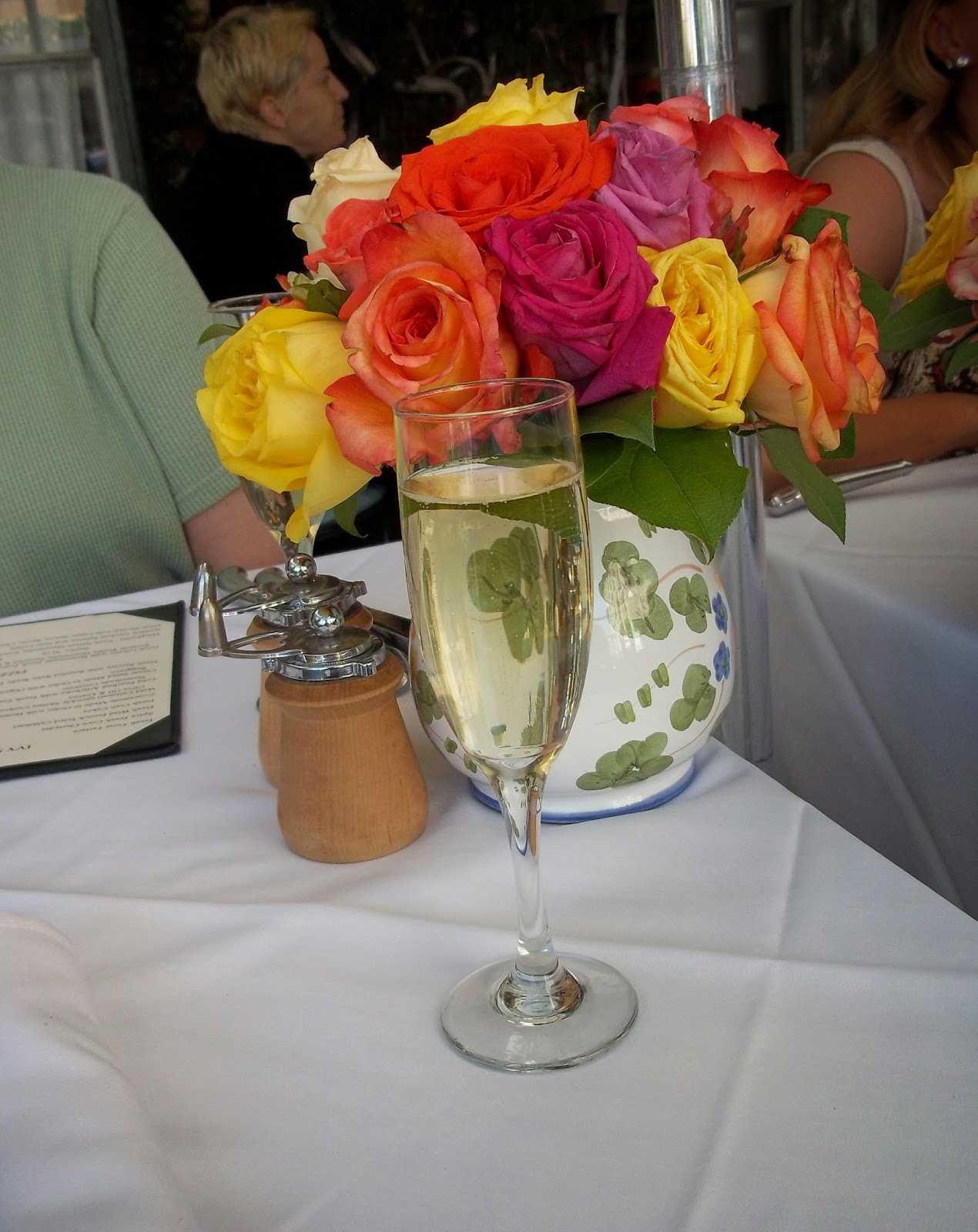 and I did not feel under dressed in my gray capris and navy Polo. But it is luxurious. As soon as you arrive, the waiter offers you champagne. Gratis. And it's good stuff, too, not Asti. Those are fresh flowers, too.

As you can see, the tables are awfully close together. If I'd had Jen and Courtney Cox's girltalk to eavesdrop on, I wouldn't have minded. But instead we got a middle-aged couple on a first date. She was a recent and very stylish Russian émigré and he was working overtime to impress her, telling her over and over how much nicer Miami is than Los Angeles. My oldest friend suspects she may have been an escort, but I'm not so sure. Why would a john care what a sure thing thinks of him?

I had the lobster pizza, and it was very good (though I'm not sure white pizza is really pizza at all), with a very generous side dish of sauteed spinach. My friend had a pasta dish and was pleased with it, too. On the way out, we got a small box of six very good chocolate chip cookies, fresh from Dolce Isola, the Ivy's bakery. Just their way of thanking us for stopping by.

So while there are restaurants in Chicago where the cuisine is just as good, and just as expensive, you don't have the TMZ bus tour driving by. It was a delicious little bit of glamor and I'm glad I finally got to enjoy it.