Unfamiliar with this week's song? Hear it here.
1) Let's get the obvious out of the way: Have you ever been to Seattle? No. I've never gone any farther northwest than San Francisco.

2) Businessweek named Seattle one of the best places to live, citing its clean air, low crime and high employment. What makes your current hometown a great place to live? I live in Chicago -- home of great dining, theater, museums, architecture and sports teams. It's more walkable than Los Angeles and more manageable than New York.

3) In this song, Bobby brags about how green Seattle is. Is it still green where you are? Or are the trees beginning to show their fall colors? Still pretty green. 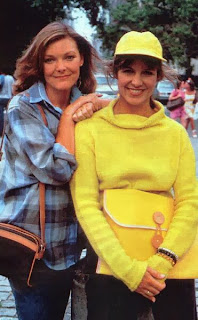 Here Come the Brides. Do you know the words to any other TV theme? "Just when you think there's no one around who's caring, along comes a friend who offers a friend in sharing. Sometimes tears and sorrow are all the things you've got. Just when you think you're all by yourself, you're not." Kate and Allie. Vintage 1980s Girl Power!

5) Bobby Sherman was once America's #1 teen idol, selling millions of records and earning 5 Gold Albums. Girls who wrote to his fan club received a postcard back signed, "Peace, Love & Bobby Sherman." Have you ever belonged to a fan club? No.

6) Alas, the career of a teen idol can be short, and by fall 1970, Bobby was replaced on magazine covers by David Cassidy. Sherman went on to a second career with the LAPD, instructing officers in CPR and first aid. Do you know how to perform CPR? The Heimlich Maneuver? No.

7) This "disc" is actually made of cardboard and was printed on the back of a Post Alpha-Bits cereal box. It was one of four that Post printed on different cereals back in 1970 so that Bobby-loving little girls would have to go through lots of different cereals to collect the whole set. What's your favorite breakfast cereal? It changes. Right now, it's Rice Krispies.

8) Crazy Sam can't decide if she wants berries or banana slices with her cereal. Which would be your choice? Berries. They're easier. Peel the banana ... slice the banana ... yes, I am indeed the laziest woman ever.

9) Do you ever eat cereal straight out of the box? Drink milk directly from the carton? Yes to the former, no to the latter.