Woke up and found myself looking at Paul Newman (ca 1966) 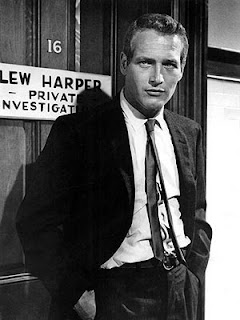 Got up very early this morning and dropped a small bag of groceries off at the local food pantry before taking Reynaldo to the vet. When we got home I was exhausted. So I lay down on the new futon (just for a minute) and woke up more than an hour later to Paul Newman.

Harper is one of my favorite Newman movies. I know it's not art. No one in the movie is especially noble and yet many characters are very likeable, which presents something of a conundrum, morally. But it's very unselfconsciously funny -- thanks to Newman's innate charm and William Goldman's slick, smartassy script.

After the movie I did my grocery shopping (and even though I had a list I still forgot stuff -- stuff I forgot to put on the list!) and now I'm watching the Cub game and doing laundry (this week I'm bleaching my whites). And drinking a margarita. Feeling very zen. Tequila will do that.