Blog Every Day in May -- Day Two 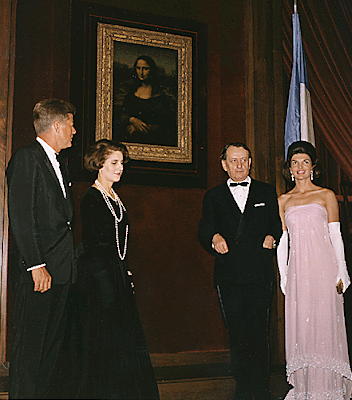 Day 2, Thursday: Educate us on something you know a lot about or are good at. Take any approach you'd like (serious and educational or funny and sarcastic)

In January 1963, the Mona Lisa left the Louvre for the first time since 1913 and came to the United States. The exhibit was masterminded by First Lady Jacqueline Kennedy, who wanted to make the world's most famous painting accessible to Americans who couldn't afford the trip to Paris. Politically sensitive because the United States wasn't on the best terms with France and De Gaulle, and physically risky since the fragile painting had been the target of theft and vandalism in the past, the determined Mrs. Kennedy got the Mona Lisa here by tirelessly lobbying French Minister of Cultural Affairs Andre Malraux (shown beside her above), convincing him that she and the President would be personally responsible for its safety. Since at the time it was valued at $100 million ($720 million in today's dollars), this was no small pledge on her part.

Then the First Lady enlisted the services of National Gallery director John Walker to make sure that La Joconde could safely be viewed by as many citizens as possible in DC at the National Gallery and then in New York at the Metropolitan Museum of Art. Painted in the early 1500s on a panel of poplar, the Mona Lisa was vulnerable to warping and cracking. She came over by ship, encased in a crate sealed inside of another, reinforced steel crate to ensure she would experience no change in humidity during her voyage. At the museums she was displayed behind bulletproof glass. Special closed-circuit cameras were installed (an innovation in 1963) and HVAC was monitored around the clock to make sure the air was cleaned of dust and impurities and temperature stayed between 62º and 65º.

By the time Mona sailed back to France in February, she had been seen by more than a million Americans. It was such a success that in the 1970s, she went to Moscow and Tokyo. Since then, she has stayed home in the Louvre.

I don't know how this fascinating bit of history escaped me until last year, but somehow it did. I love this story because it shows that in our not-so-distant history, we were proud of being interested in art and beauty and the culture of foreign lands … even if we happen to be in political disagreement with the heads of state of those foreign lands.