The return of the hangers

Just to bring y'all back up to date -- I haven't been blogging about what's really going on inside of me because it hurts.

My grief over my mother's death has caught up with me. I was really pretty OK immediately after it happened. I know to those who don't share my faith my initial reaction may not make sense to you, but I was actually relieved and happy for my mom. She had lived in fear since her first attack of ischemic colitis last March. She was in such pain and misery during her last hospital stay, just before her death in September. I was grateful her suffering was over and comforted by the thought of her healthy, happy and whole in Heaven.

My faith got me through the worst of it. And so, in a way, did my own fear. The bills she left were daunting, and as the responsible party I was stuck muddling through the legal and fiscal mess.

But now the estate paperwork is coming together. The shock of passing and the relief of her ascension have morphed into being facts of my life. And I'm left with missing her. 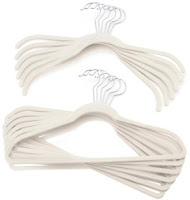 So I have been sporadically miserable.

I shared this with my best friend, especially the scary emotions triggered by merely purchasing hangers. I realized not only the depth of my grief, but also how unstable my life feels right now.

Guess what he sent me in the mail. Yes, a box of padded "huggable hangers," just like the ones my mommy bought me for my birthday in years gone by. And there was a lovely card included. The longest handwritten note I have ever received from him in 8 years of almost constant contact. He promises to be here for me now, months after the event, because now is when I'll need him because everyone else thinks I've moved on. But he knows better. When his beloved grandmother died, twenty years ago, he was left in charge because his mother was too grief stricken and his siblings didn't even think to "step up." So he knows the routine -- the distractions of friendly, helpful phone calls and notes and dealings with wills and estates eventually give way to the humdrum reality of loss. Day in, day out loss.

It was a wise gesture. The kind of thing he excels at. He has always had a way of getting through to me with the right message at the right time.

I only wish he was happier in his own life, in his own skin. But that's a post for another day. Writing this left me weary!