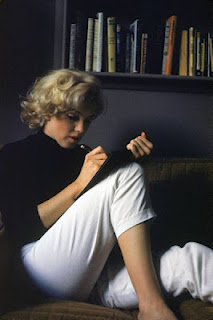 
Jeanne was on her bed, wrapped in a towel, slathering herself with body butter when her late husband appeared in the doorway. He was improbably dressed in nothing but khaki shorts and his beloved Yankees cap.

Ah, that cap! She remembered the first time she saw him wear it, when they were still dating. “You’ve never even been to New York. Why are you a Yankees fan?”

“Cuz it’s easy,” he replied with a smile. Trav was always all about easy. That’s what killed him more than three months ago. The late January sky had unexpectedly dumped 3" of snow on his car while he was at work. He called Jeanne from the train station and told her he had no intention of messing with a scraper this evening. Instead, he said, “I’ll just take a taxi cuz it’s easy.” The next call she received was from the hospital. The driver had a heart attack and crashed the taxi into a tree, killing them both.

And yet here he was, in front of her, healthy and whole and quite beautiful. He had that look in his eyes that she knew so well, the one that preceded him whispering, “Make me late for work.”

He moved to the bed and she dropped the towel and lay back. She felt him guide her hands all over her body. He knowingly showed her where and exactly how to touch, stroke and probe. She squeezed her own, now rounder, belly, the result of three months of comfort carbs. Travis didn’t seem to mind, though. Jeanne felt proud of her body, connected to it, for the first time since he’d gone.

When she was done, darling Travis’ image receded. She was alone on the bed but now less lonely. Instead she was relieved and relaxed, listening to birds outside her bedroom window. There had been nothing ghoulish or sinister in this spectral sex. It awakened her to spring and reminded her she was still alive.